Let’s face it you would have been very lucky to survive the ‘Black Plague that swept through the villages, towns and cities of medieval Europe.

The Plague was actually 3 bacteria strains that combined together to cause a devastating illness that virtually nobody who caught it survived – the worst of these 3 strains was the ‘Bubonic Plague’.

Dirty, cramped and unhygienic living conditions throughout medieval Europe created a perfect breading ground for rats and the ‘Black Death’ or ‘Bubonic Plague’ was spread easily by these cramped and squalid conditions.

It was transmitted from fleas living on dead rats that jumped onto it’s human host and then bite them, transmitting the bacteria.

Pretty gross I know and then the disease was quickly passed from human to human! 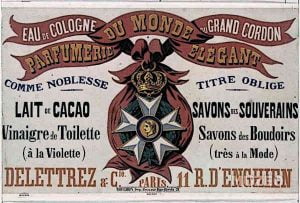 During the Period of the ‘Black Death’ perfumes were invented and introduced including Eau du Cologne, possibly due to smell of people who had not bathed

The devastating period of the ‘black death’ finally came to an end when is is believed a very cold snap killed off the Bacteria strains the were causing the epidemic.