During most of the medieval period, Ireland constituted of a number of kingdoms each of them ruled by a king of its own.

At the same time, parallel hierarchy existed whereby a High King, usually the most powerful of the individual kings, was elected to rule over the whole of Ireland through the local kings in each kingdom.

This system existed well until the High Middle Ages.

Although many local kings rose to historical fame in Ireland during the medieval period, the High Kings were the ones who were truly accorded the title of the Kings of Ireland.

Following are some of the most famous of these Irish High Kings.

Flann Sinna ascended to the position of Irish High King in 879.

Before his ascension to this position, he was already the King of Mide, one of the kingdoms in Ireland.

Immediately after his ascension, Flann launched a large-scale campaign to militarily subdue the other kingdoms of Ireland and assert his authority over entire Ireland.

He most notably defeated Ulster, Munster and Connacht while forcing Leinster into submission.

A very significant part of Flann’s political strategy was to have monumental high crosses constructed all over Ireland, serving as an important propaganda tool to consolidate his authority.

He is considered among the most successful kings of Ireland.

He rose to this position after already being the King of Connacht from 1156 onwards.

He was the last High King of Ireland before the Norman invasion and through most of his reign, he was actively involved in military exploit.

Until his ascension to the kingship of Ireland in 1166, Rory was continuously embroiled in warfare with the previous High King, Mac Lochlainn.

His reign saw the beginning of the Norman invasion of Ireland at the end of the 12th century. 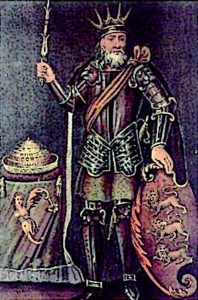 Brian Boru is considered the most famous of Irish kings

Although Brian is popularly considered the High King who liberated Ireland from Viking invasion, this view is more mythic than factual.

After consolidating his kingship in his home region of Munster, Brian sought to extend his power and to this end, began raiding the neighbouring regions of Connacht and Ulster.

He then fought a 15-year long military conflict with the then-King of Ireland, Mael Sechnaill and mastered the military use of land and naval forces in coordinated attacks.

By 1002, Brian had successfully defeated Mael Sechnaill and assumed the High Kingship of Ireland.

He also brought the prosperous Hiberno-Viking urban towns and cities under his control, adding a small body of Viking troops and mercenaries to his army.

His reign remained fairly secure until 1012 when the King of Leinster rose in rebellion.

This resulted in a protracted conflict which led to the fateful Battle of Clontarf where Brian was killed in combat.