Becoming a knight was a long and difficult process and only the sons of Nobles could become Medieval Knights.

Training to be a medieval knight started at a very early age around seven years of age boys would become a page.

A pageboy would start to learn how to fight and ride a horse in a castle until they were around 14 years of age, then they would become Squires.

During the early years of becoming a knight pages were given a basic education and taught how to handle themselves in everyday life doing chores such as serving food at the table etc.

It wasn’t until they became Squires and were sent to live with a Lord that training to become a knight began in earnest.

A page would become a squire at the age of fourteen; he would then become an understudy to an established medieval knight.

This was his apprenticeship that would eventually lead to him becoming a knight and he would look after his mentor doing a variety of task whilst observing and learning new skills from his master. 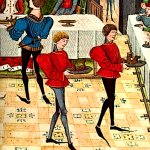 A squire had to master a variety of weapons whilst being an expert on a horse; he needed to know everything it took to become a medieval Knight.

The apprenticeship was long and hard and the squire would have to keep his master’s armour and weaponry in top condition.

Squires had to learn fighting techniques and riding skills and would watch their masters closely and follow them into battle.

Medieval knights needed to be extremely strong to be able to carry heavy weapons during long battles whilst wearing heavy armour.

Squires worked on their strength and conditioning on a daily basis and were extremely fit.

Squires needed to practice their fighting skills and learn different fighting techniques with different weapons on their way to becoming a knight.

As the medieval period progressed, training methods advanced and specialist equipment such as the Quintain introduced.

The quintain was a rotating pole that squires and knights charged on horseback, they would try to hit the shield cleanly with the tip of their lance and if they did not hit the shield at the right place at the correct speed the rotating sandbag could knock them from their horses.

Medieval Squires would practice acrobatics and do other strength and fitness training on their route to becoming a knight.

Small round Buckler style shields made from wood or metal used to defend against attacks.

Medieval Squires had to learn the code of chivalry that applied to all squires hoping to become a knight.

This was basically rules the Medieval Knights had to follow and involved morality teachings, codes of acceptable conduct that knights had to display towards people especially women and strict rules they had to obey. 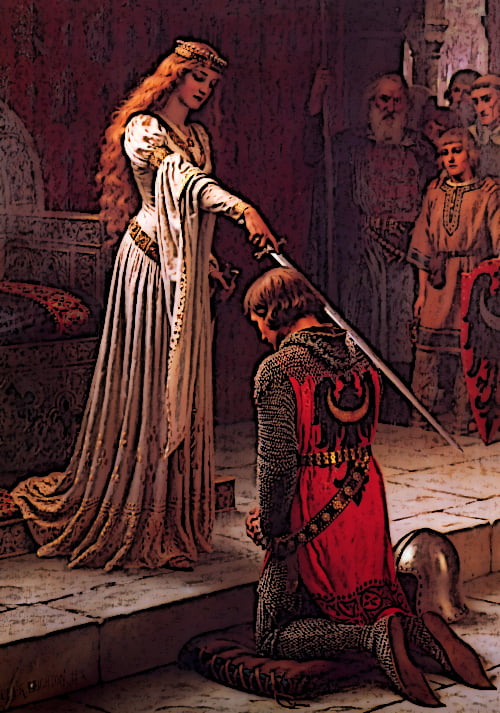 Becoming a Knight – A Squire is knighted at a dubbing ceremony

Becoming a Knight | The Final Ceremony

After years of intensive training under the wing of an established knight it would finally be time for the medieval squire to make the transition to becoming a fully-fledged knight.

This would usually be around 21 years of age. In preparation for the special dubbing ceremony the following day, squires would spend the night before the ceremony in prayer asking for guidance in their new role as a knight.

The squire dressed in a white robe would kneel down and have both his shoulders tapped with a sword, usually by his father as other nobles watched.

A squire was given a sword and spurs for his achievement and new found status at becoming a medieval knight.

At the end of the dubbing ceremony, a knight’s father would say the following or similar words:

“Go fair son be thou a valiant knight and courageous in the face of your enemy and be true and upright that God may love thee".

If a battle was about to commence the dubbing ceremony could be brought forward as a new knight would be eager to prove his worth on the battlefield and becoming a knight would inspire them in battle.

On rare occasions, a squire would become a knight on the battlefield if they had carried out an act deemed worthy of such accolade.