The Green Knight is a famous legendary character that is found in the medieval poems about King Arthur, in particular the poems Sir Gawain and the Green Knight and “The Greene Knight”.

Medieval legends portray the Green Knight as being one of the most powerful characters in the court of King Arthur, although in other legends his is not a member of the court.

Various interpretations have been used by scholars in order to describe the meaning of this character. Thus some have associated his greenness with a figure from Celtic mythology or with the Devil himself.

Many famous writers have shown a keen interest in the character, with J.R.R Tolkien calling him “the most difficult character” to interpret. 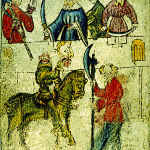 Image that depicts the tale of Gawain and the Green Knight

Who was the green Knight?

Various meanings have been attributed to the actual identity of the Green knight. The medieval poem simply calls him green because his clothes and skin are green.

Some have called him as being a part of nature such as vegetation or being medieval art, others consider him to represent a Christian symbol, and yet others believe him to be a mythological character.

The Green knight is generally considered a legendary or fictional character because of his attributes that distinguish him from common humans.

The green color of skin, for instance, is an unusual attribute although scholars have tried to explain it in various ways. Thus a lot of scholars believe him to be a representation of nature instead of being an actual man.

The Green knight appeared in various medieval poem from the late medieval times.

The earliest poems mentioning him are from the 14th century, in particular the poem called Sir Gawain and the Green Knight which was written by an author known as Pearl Poet.

Other poems and legends in the later period mentioning the Greek knight include: 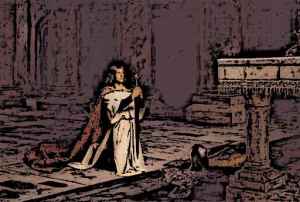 Legend of the Green Knight

In “The Greene Knight”, his skin colour is not green but he wears green clothes. In yet another legend, King Arthur and King Cornwall, he appears as one of King Arthur’s knights.

Life of the Green Knight

Since the Green knight was not an actual character, his life is characterized by various legends that have been attributed to him.

He has also been given different names in different legends. For instance, he appears as Bercilak de Hautdesert in “Sir Gawain and the Green knight” but is called Bredbeddle in The Greene Knight.

The Green knight is one of the most interesting legendary characters of the medieval times and is depicted as a man having green skin and clothes in different legends.

In one of the legends, he also appears as one of the knights of King Arthur.

The green color of the Green knight has variously been interpreted by the scholars and there is no agreed opinion on these different interpretations of the Green Knight.

We hope you enjoyed reading this article on the fictional medieval character the Green Knight, if you’d like to find more information on fictional characters similar to the green Knight please look at the the links at the bottom of this green Knight article page.

We suggest you look at the story of King Arthur and the Knights Templar which are both fascinating subjects.

Legend of the Green Knight Resources

Learn more about the Green Knight at wikipedia