Windsor castle is a famous castle that has a very long association with both English & British royal families, it was built in the 11th century during the invasion of William the Conqueror. Windsor castle has been occupied by succeeding monarchs Since Henry I, which makes it the longest occupied palace in Europe.

The castle was built on a very strategic position from which it offered protection from Norman dominance and gave good views over the River Thames. The location was chosen by William himself in 1070 and it took him 16 years to complete the building of the castle.

Windsor castle is quite something when it comes to its architecture. In over thirteen acres it combines fortifications, a palace and a small town in order to make the whole castle feel like one massive structure. The main design is a mix of Georgian and Victorian architecture and is based on medieval structures with Gothic features added in the later middle ages. This castle has a certain fictive quality due to the fact that since the 14th centuries all the architects have tried to mimic and implement older fashions and traditions into the design of the castle as a whole. 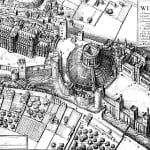 The castle is made up of a lower, middle and upper ward. The middle ward was the most fortified because it contained the main keep. Each wall and tower had Arrow loops in order for the defending archers to have an easier time targeting enemy attackers. The defenses of the castle were so good that they were able to withstand the ultimate attack of 1216 (The Barons Revolt) when different Siege towers, battering rams, trebuchets assaulted Windsor castle on mass, attacking its 4 meter thick walls time and time again, After 2 months the siege had to be abandoned as the castle stood firm and the attacking armies left totally exhausted and demoralised.

The First and most important fact is that Windsor castle is the largest inhabited castle in the world and has housed the British kings and Queens for almost 1000 years. It is a home to Her Majesty Queen Elizabeth and has around 150 people living and working there. The oldest order of chivalry, the Order of the Garter was formed in the St George Chapel in 1348 by Edward III.

“A great fire broke out on the 22nd of November 1992 in Queen Victoria’s private chapel, which caused over 37 million pounds worth of damage”.

When William the Conqueror made a series of motte and bailey castles around London, he positioned each one very strategically so they could help to defend one another. Each castle was placed 32km (20 miles) apart making it a one day march to reach any of the other castles. The primary focus of the castle was for defensive purposes and it was not intended to be a residence. 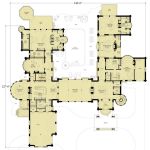 Image of the floor plan of Windsor Castle in London

The first king who used Windsor Castle as a residence was Henry I. Henry II in 1165 and in 1179 it was built up and renovated extensively to improve Windsor Castle by replacing the wooden palisade of the upper ward with a stronger improvement, stone. Massive foundations were added to the wall because they started to sink in due to the earth not being solid enough.

The castle survived a number of sieges in this time; the most important was the one in 1216 by French troops. The attack was repelled and all the damage done to the defenses was quickly repaired by 1221. In 1224 to 1230 the Lower ward was finally built from stone and as an improvement received a gatehouse with three towers. King Henry upgraded the accommodations in 1240 to 1263 and built a luxurious palace in the Upper ward.

King Edward spent around 51,000 pounds renovating the castle, making it the most a monarch had ever spent up until that point. Three courts were made in the Upper Ward, called Little Cloister, King’s Cloister and the Kitchen Court. During Edwards rule he built improvements which were very luxurious and all focused around accommodations and art. He believed the fortifications could hold any attack and he was right because no one dared to attack the castle for quite some time. 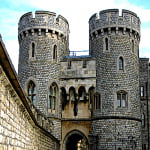 In the year 1417, Henry V prepared the castle for a visit from the Holy Roman Emperor, which was a massive diplomatic event that managed to stretch the castles accommodation to the limits. Edward IV gained power in 1461 by capturing Henry’s wife and then he slowly started reviving the Order of the Garter which led to a lavish feast in 1472.

Edward decided to make the St.George’s Chapel. Henry VII in 1488 made a massive feast for the Order of the Garter and he completed the roof of St George’s Chapel. After the reconstruction Windsor Castle started being used for International diplomatic events, such as the grand visit of Philip I of Castille in 1506.

Today Windsor castle is owned by the Occupied Royal Palaces Estate with day to day management by the Royal Household. This castle currently is the largest inhabited castle in the world and also holds the title of the longest occupied palace in Europe. The castle hosts frequent banquets and different presidents from around the world attend them. The famous Waterloo ceremony is carried out here, in the presence of the Queen each year, as well as the annual Order of the Garter which takes place in the St George’s Chapel. Over 1 million people have visited the castle and seen its interior every year since 2007.