The Medieval Period in Europe started around the time of the fall of Ancient Rome and ended with the European Renaissance, historians believe these dates to be from 476 AD – 1453.

During this period, a number of major upheavals reshaped Europe permanently, established Christianity as its major religion and laid the foundations of modern-day Europe. 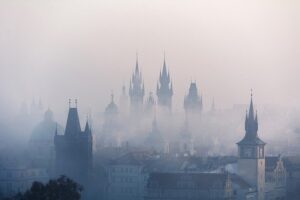 Medieval Timeline of Major Events during the Middle Ages

476 A.D. marked the fall of Ancient Rome, the great civilization which ruled most of the Europe until its fall. This collapse was limited to Western Rome, which was the actual seat of ancient Rome. Eastern Rome, centered on Constantinople and continued to exist for many more centuries. But the fall of Western Rome led to fissures in Europe and a power vacuum was created.

Gaul was previously a province of Rome and Roman armies had repeatedly defeated the Gauls who strove for independence. By 481, Frankish tribes in Gaul had united under King Clovis. This unity and the rise of Franks was to have a lasting impact on the outlook of Western Europe.

By 732, most of the Europe had already converted to Christianity. Islam, another significant religion, had taken birth in Arabia in the 6th century. Muslims conquered vast territories and knocked on the doors of Europe during the 8th century. Franks, one of the only major powers in Europe at the time, confronted Muslims and defeated them. The battle also led to the creation of Carolingian Empire of the Franks.

800: Charlemagne as the Holy Roman Emperor

Charlemagne is considered one of the most eminent of Frankish rulers who conquered vast regions of Western Europe and carved out a huge Empire. In 800, he was crowned as the Holy Roman Emperor which effectively consolidated the political and religious power in his person, allying his Empire closely with the Catholic Church.

Vikings were a formidable force which emerged in the 9th century and continued to be a considerable power until the 11th century. Vikings rose from Scandinavia and were a warrior people who raided many areas of Europe, including the Byzantine Empire and Russia. Their attacks would continue for two centuries.

Alfred The Great became the King of England in 871. He was the first King to rule over a united England and established a solid basis for a monarchical rule in England. He also warded off the threat of the Vikings successfully.

After Charlemagne, Otto the Great became one of the most prominent rulers crowned as the Holy Roman Emperor. Otto asserted the imperial authority against the authority of the Church. He was the first German to be made King over lands including Italy.

William of Normandy conquered England in 1066, putting an end to the Anglo-Saxon nobility established by Alfred The Great many centuries earlier. William instead established a French-Norman nobility and completely transformed the social and political outlook of the Kingdom of England.

1095: The beginning of Crusades against Muslims

After Muslims had captured the Holy Land, the Pope issued a decree asking the European powers to partake in Crusades against the Muslims and to repel them from the Holy Land, including the portions of Byzantine Empire that were under Muslim control. This pitted the Holy Roman Empire against the Muslims and the conflict involved 9 major crusades, and other minor crusades. The crusades established the significance and importance of knights all over Europe.

Saladin, one of the major Muslims commanders during the Crusades, captured Jerusalem in 1187. Saladin was later to be a part of many battles of the Muslims against the forces of the Crusades.

Richard the Lionheart became the King of England in 1189. He was later to earn repute as an astute military commander in the Crusades against Muslims, and to score many victories although not succeeding in getting Jerusalem back from the hands of Saladin.

King John of England signed the Magna Carta in 1215. This document was decisive in laying the foundations for democracy in later centuries. The most significant part of the document stated that the King was not above the law.

1337 marked a major moment in the history of the rivalry between England and France. In 1337, Edward III of England declared war on France, making a claim to the French throne. His claim was thwarted by France and both countries plunged into a long war which lasted until 1453 and was known as the “hundred years war”, although it lasted slightly longer than this.

1347: Arrival of Black Death in Europe

Black Death, a bubonic plague, reached Europe in 1347 when a ship carrying the plague landed in Sicily. From Sicily, the plague spread to all parts of Europe and killed a major portion of the populations throughout Europe over the next few years.

Joan of Arc of France was captured by England after she scored many decisive victories against the English troops. She was deemed a witch and burned at the stake.

Florence was one of the most prosperous trade hubs in Europe in the 15th century. In 1434, the Medici family rose to power and prominence in Florence. This single event would very significantly impact the European Middle Ages. It laid the basis of the Italian Renaissance which ultimately lead to the wider European and English Renaissance and changed the very face of Europe in the subsequent centuries.

Along with the revival of Roman and Greek literature, the invention of the printing press by Johannes Gutenberg of Germany was one of the major events that made Renaissance possible. Gutenberg printed bibles on his press and soon, his press became the symbol of the European Renaissance.

Learn more about the medieval timeline at Wikipedia