The use of medieval coat of arms began in the 11th century and was initially limited to warrior chieftains. By the 12th century, the coat of arms was being used by notable feudal lords and knights.

Over time, the medieval coat of arms became synonymous with the family name and was used to identify different families, on and off the battlefield.

Medieval coat of arms refers to a specific design done in the heraldic manner and usually bore on shields. In later coat of arms during the medieval era, motto’s and other details were added to it to make it more detailed.

Each coat of arms was unique in that it could identify the family or the person to which it referred. The symbols used in the coat of arms were often depictions of power, strength, military prowess and traits of the families they represented. Coat of arms could also be inherited from a person by his descendants. 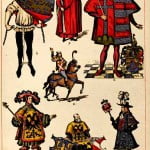 Throughout history, specific symbols have been identified by humans for the sake of identification. In the Roman Empire, symbols were used on shield to identify specific military units.

In medieval era, this tradition evolved further in Europe so that different chieftains began the use of coat of arms in order to differentiate between themselves on the battlefield.

The tradition became popular in the 12th century and was initially specific to battlefield identifications. Later,the use of coat of arms became more common, being used simply to identify a person or a family, both in war and peace situations.

The earliest recorded use of a coat of arms during the medieval era can be traced back to the Bayeux Tapestry. The tapestry depicts the events of the Norman quest of England and shows many warriors with shields bearing the sign of a cross.

The next recorded evidence of a form of heraldry is that of Geoffery V’s knighting in 1127 at which occasion he was given a shield painted with golden lions to hang around his neck.

The medieval coat of arms became popular and commonly used by individual families or persons by the 13th century. It was at this time that the practice of inheriting a coat of arms from one generation to the next began.

The practice of cadency also began at this time which referred to slight modifications in the design of the coat of arms. This became necessary for families with multiple sons. Daughters also inherited the coat of arms and when they married, the union was celebrated by different ways of mixing the two coat of arms, that of the bride and of the groom.

By 14th century, intervention of the crown was being sought in disputes related to coat of arms inheritance and eventually, countries like England evolved elaborate legal systems overlooking medieval coat of arms and their inheritance. 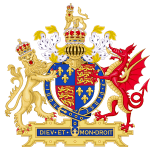 The coat of arms was originally used by military chiefs, as an identification during battlefields. However, eventually the nobility at large came to use the coat of arms by the 13th century. In some cases, such as Germany, non-noble free men were also allowed the use of coat of arms. 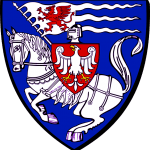 This is a medieval knights coat of arms

In some theories, coat of arms are closely associated with the knights. It has been proposed that the origins of coat of arms was in the tourneys of the knights where a need for identification of rivals or rival teams was felt and this lead to the tradition of the coat of arms.

Even if this origin is disputed, the fact remains that eventually knights did come to have their own coat of arms, some of them either of the lord or noble that was their superior, others of the order they served as displayed during the Crusades.

Heraldic divisions in the colours of the coat of arms, for instance in the pattern of crosses or V or simple dissection of the shield into two colours, was used to depict traits such as Protection, Honor, Defense, Faith and military strength. Symbols were extensively used to further such meanings.

An anvil, for instance, was a symbol of honour, an arrow symbolised willingness to go to war, bear symbolised cunning and strength, bull symbolised bravery and generosity, castle represented vigilance and safety.

The medieval Coat of arms have been closely linked with jousting tournaments in some historical theories. According to these theories, the tradition of medieval coat of arms originated directly at the tourneys and jousting contests.

This is supported by the fact that the first jousting tournament took place in the middle of 11th century and a century later, coat of arms had already begun to gain traction all over Europe. At the tournaments, pretend-battles between two groups of knights were fought. Before the battle, each group paraded with its coat of arms, which may have birthed the need for differing coat of arms eventually. 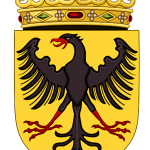 During the early medieval period, military chiefs primarily bore coat of arms, so the practice of heraldry was mostly limited to warriors. Eventually, this also became possible for the noblemen who could join the King in battles with a certain number of people.

Over time, knights were also allowed to have their own coat of arms. Coat of arms typically included certain terms referring to the family name and profession. Chandler, for example, if used on a families coat of arms referred to their profession as candle makers. Similarly, modified forms of family surnames were also used.

Among the key functions of the coat of arms was the identification of friends from foes during the mêlée of the battlefield. And since the families which accompanied the king during a battle belonged, in early medieval era to the warrior chieftains, and in later period to the nobility, so the coat of arms was limited to these classes in these periods .

The sole battlefield purpose of the coat of arms was identification, and this purpose was soon overtaken by a greater ambition by families and individuals to identify themselves even in peace time.

Medieval coat of arms originated either as a result of the need for battlefield identifications, or simply because of a spirit of rivalry during jousting tournaments. In either case, historically coat of arms came into popular use in medieval Europe by the 12th century.

Families and individuals used complex symbols and heraldic elements to create unique coat of arms which came to be identified by them and inherited down the generations.

Learn More about Medieval Coat of Arms at Wikipedia