The clothing used by the Moors in Iberia was rich and comprised of a wide variety of materials. The clothes and dressed produced in Moorish Iberia were known for their high-quality and excellent finish, leading to their high demand in non-Moorish territories as well.

Among the types of materials used in producing Moorish clothing was silk, linen, cotton, felt, leather and fur pelts. Each material was further treated and manufactured in a variety of ways, to be used for different purposes such as to produce undergarments or for outerwear or headwear.

Silk was among the most notable materials used in Moorish clothing. It was used in a plain weave as well as woven on a tablet. Many different colours of silk were used in clothing and it was often embellished with gold thread-work. Silk woven in Almeria and Granada was specifically of high quality. 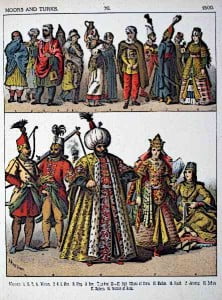 The main garment worn by the Moors in their everyday clothing was a long robe called aljuba. The robe was used by both Moorish men and women. An almejia was another outer garment, long and loose in its make and probably used over the aljuba.

Another type of garment used by the Moors was the shaya which was a shorter robe with tighter sleeves. Although the shaya was initially worn by the Iberian peasants, it was a part of the clothing of Moorish nobility by the 12th century.

A hooded cloak called albornoz was also frequently worn by the Moors. It was directly inspired by its North African counterpart. A short piece of cloth called alquice was worn by Moorish men and women. It was variously used as a headwear or to be draped around the shoulders.

Moorish clothing included a large variety of headwear, used by both men and women on different occasions and through different periods of Moorish rule. Gifara was a woolen skullcap which was usually worn in red or green colours. The imama, or turban, was also a notable headwear most popularly worn in the western territories of Moorish Iberia.

The imama was usually made from wool or linen and curved around the face with a tail at the back of the head. Silk was used in the turbans of richer nobility. Litham was a form of Moorish veil which was variously used by both men and women, covering the lower half of the face. This form of veil was popularly used by the members of the Almoravid dynasty. Litham was mostly made from silk and was sometimes embellished with gold.