A Castle Gatehouse was strong, usually made of very thick stone blocks, in addition to this it also had some pretty nasty traps for unsuspecting enemies like murder holes built around the top of gatehouse passageway walls, large heavy objects such as rocks could be dropped from the murder holes or hot burning liquids like tar or boiling water. On top of this there were other deterrents built into medieval Gatehouses, the Portcullises for example which was an extremely heavy wooden grille made from strong wood (commonly Oak) sometimes metal plated with iron. The Portcullis could be released at any time and would injure and maim enemy soldiers. Portcullis grilles were also made from solid metal in later medieval times.

The Gatehouse Portcullis was designed to stop surprise attacks from enemy soldiers, it was a heavy metal grilled Gate that was suspended in the air, held by thick rope or chains it could be released in an instant by releasing the holding mechanism of winches and pulleys that suspended it from the ceiling. The portcullises also created a another barrier to slow down or stop battering rams and other siege weapons.

Design of the Castle Gatehouse

Early castle Gatehouses were fairly basic but as the medieval period progressed and knowledge of building techniques improved so did the design of the gatehouse which went from a simple structure to a 2 or 3 storey building. The castle gatehouse needed to be strong but it also needed to look the part to impress other kings, this is why many castle gatehouses are the most impressive parts of a medieval castle and incorporated many features that also helped to protect the castle.

Towards the end of medieval times castle Gatehouses across Europe were transformed into stunning structures that were buildings in their own right. Most castles had one portcullis (heavy grilled gate with metal spiked ends) that was suspended vertically and could be released instantly to stop surprise attacks. The main castle door with was usually made of thick wood would be barred which strengthened it against battering rams and other similar siege weapons. Various other defences were built into the Gatehouse area such as arrow-loops and murder holes.

The Castle Gatehouse could be 3 storeys in height

The Castle Gatehouse could include some or all of the the following depending on the date it was built and it’s size.

History of the Castle Gatehouse

The idea of protecting the most vulnerable part of a defensive building like a fort or castle originated in a period before medieval times (476–1453) in a period referred to as antiquity, this period includes the bronze age and the times of the Roman empire. The entrance to a castle or town were always the weakest link and builders had to come up with ways to make them more secure. As time progressed more advanced gatehouses were designed that became 2 and 3 storey buildings that incorporated advanced defensive features such as murder holes and portcullis which led to the development of the castle gatehouse. 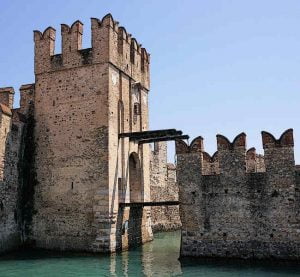 Trapped in the Gatehouse

An attacking army could easily be tricked into entering a gatehouse passages with the entrance being mysteriously open, some castles had portcullis at both ends, the attackers could be lured into the gatehouse, once inside the first portcullis wood or metal plated grille would be released stopping their retreat, the second portcullis at the far end would protect the castle doors. The soldiers who were now trapped inside the gatehouse passage would then be attacked from the murders holes with heavy rocks, hot tar and boiling water amongst other nasty things that were dropped on them without mercy from the murder holes at the top of the walls. Usually crossbowmen lined up along the gatehouse passage walls to fire arrows at the enemy whilst they were trapped.

Did you know this about Castle Gatehouses:

We hope you enjoyed reading this article on medieval castle gatehouses and would encourage you to look at our other articles on the medieval castle parts page which is linked at the bottom of this page, if you are interested in seeing castle gatehouses in person there are many scattered around Europe, good examples of gatehouses can be seen in France, Germany and York in England which has many gatehouses built into it’s city walls such as the Micklegate Bar.