Henry VIII, the second Tudor monarch, ascended the English throne in 1509. During his reign, he engaged in extensive warfare on Continental Europe as well as in the north of British Isles. In the early part of his reign, Henry had to import most of the armour pieces for his troops from European cities such as Milan and Florence.

His personal armour also had to come from these cities since England at the time had no notable armoury. Henry changed this by establishing the Royal Workshops at Greenwich which in time came to be collectively called the “Greenwich armoury”.

The Greenwich armoury was established around 1515 when Henry VIII began to hire notable armourers from Europe, first on more temporary basis and then on a more long-term commission. The armourers hired for work at the armoury were Flemish, Florentine, German and Dutch, all hailing from continental centres of armour production.

This period was marked by armours being commissioned by a large number of English noblemen and a major evolution in the design and outlook of the armours. The third phase of the armoury’s activity commended with the Stuart period in 1605 and continued until the English Civil War. 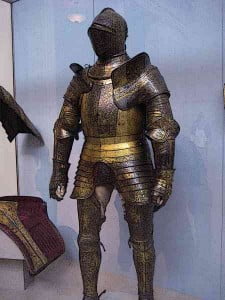 Henry VIII specifically had the Greenwich armoury establish so that he could quickly commission personal armours of his liking as well as armour pieces for his soldiers. During Henry VIII’s reign, a large number of German, Flemish and Italian armourers were hired to work at the armoury.

The armours produced at the Greenwich workshops during this period heavily reflect German influence though with a distinct outlook of their own. In accordance with Henry’s artistic taste in other matters, the armours he commissioned were highly well-embellished with exterior decorations, engraving and metalwork.

The Greenwich armoury evolved its own distinct style of armour-making during the reign of Henry VIII, relying heavily on gilded and engraved decorations. By the time of Elizabeth’s reign in the latter half of the 16th century, the armoury’s style had significantly evolved.

The armours produced in this period more closely imitate contemporary dressing fashions such as the use of highly curved cuirasses and the use of bold and bright colours. Exterior decorations came to employ the use of colours rather than engravings while the use of steel of different tints also became a regular feature of the Greenwich armours of the time.