Porchester castle is located in the county of Hampshire. It was originally the site of a fort built during Roman times. The castle was built on the place of the fort in the 11th century. The castle remained in royal possession throughout most of its history. It was used both as a royal hunting lodge and as an important fortification situated near the Portsmouth Harbor. 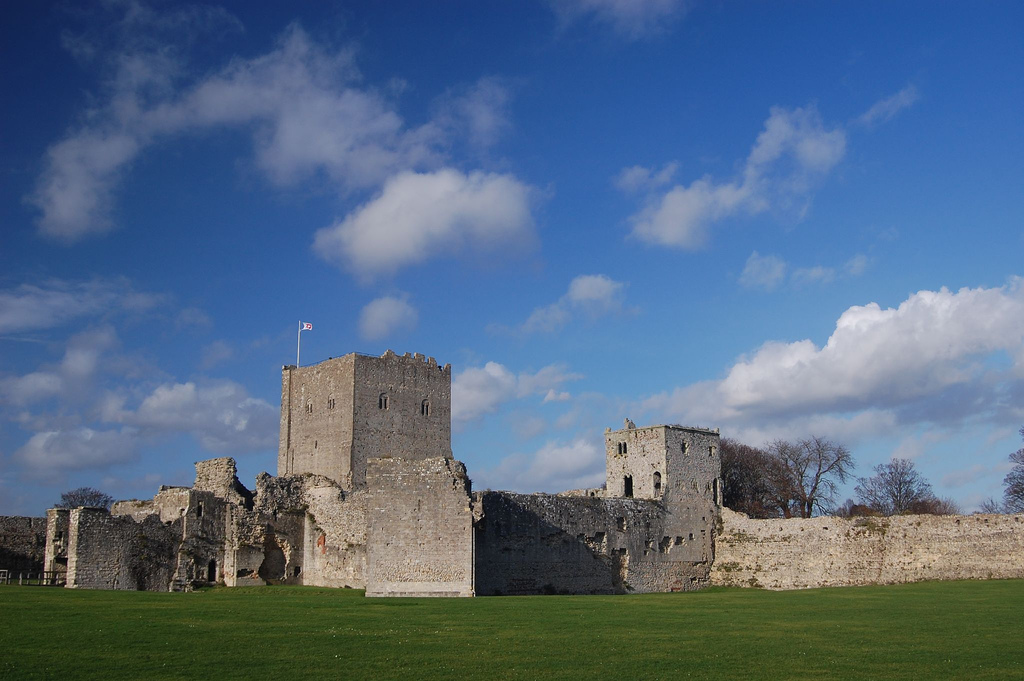 The castle was refortified in the 15th century in anticipation of the Hundred Years’ War. In the 17th century, it was sold by Charles I to Sir William Uvedale and remains in the ownership of his descendants to this day.

Originally, a Roman-era fort stood at the place of the Porchester castle which was originally constructed in the 3rd century. Parts of this original fort were incorporated into the later castle and some of them, including D-shaped Roman towers, exist to this day. The medieval Porchester castle was built in the 11th century as a motte-and-bailey structure. It was rebuilt in stone in the early 12th century and an outer bailey was added at this time. The castle was in the possession of William Pont de l’Arche until 1148 when it passed to his son but was soon taken into royal possession in Henry II’s era.

It remained in royal control for the next few centuries.

The castle is located in the county of Hampshire. It is situated to the east of Fareham and was originally the location of a Roman-era fort. The castle’s location is strategically important because it is located at the northern end of Portsmouth Harbor.

In the 3rd century, the Roman established a fort at the site of the later Porchester castle. The fort was probably used by the Roman fleet. It was later used by Saxon kings and after the 11th century, the Norman conquest was handed over to William Maudit.

The castle was probably built in the 12th century. By 1154, Henry II had taken control of the castle. In 1216, the castle was captured by forces loyal to Prince Louis but was lost in 1217. Significant re-fortifications were added in the early 14th century in the face of the French threat.

Edward III rallied his forces at this castle before departing for France in 1346. The conspiracy to overthrow Henry V was uncovered in 1415 while he was at Porchester castle. It was used intermittently as a prison in the 17th, 18th, and 19th centuries.

What Type of Castle is Porchester?

The castle is primarily a military structure and is located at the strategic position of Portsmouth Harbor. Throughout the middle ages, it served as an important military castle for the English monarchs.

Although it fell in a siege to the French in the early 13th century, the castle was later an effective defense structure. It didn’t directly face any major enemies or sieges in the later period but it was the point where the English kings sent many expeditions into France.

It was also one of the strategic points that the English monarchs believed would be effective in thwarting a possible French conquest.

Among the most interesting features of the castle are the extant structures from the Roman era. Although the Roman fort was erected in the 3rd century, it was in good shape when the medieval castle was built in the 11th century. So many of the D-shaped towers of Roman times were left intact and these towers still exist today.

The motte-and-bailey construction of the original Porchester castle was placed with a stone construction sometime in the early 12th century. A stone outer bailey with a stone church was also constructed at this time. Another notable part of the castle’s construction is the stone keep which rises to a height of four stories.

The walls of the castle are 6 meters high and have a thickness of 3.2 meters. The walls are built by using flint and limestone to give them long-term durability.

The castle’s defenses were scarce until the time of its ownership by Sir Robert of Ashton who had a new tower added to it. Called Ashton Tower, this was a major defensive structure of the castle that proved critical in warding off an attack on the castle during the Hundred Years War.

The tower was later used to place black powder guns. The walls of the castle also have projected arches which makes it incredibly difficult for incoming attackers to scale them.

Porchester Castle is Famous For?

The Porchester castle was frequently the residence of English monarchs and was famous as their occasional retreat. Henry II stayed at the castle in 1163. Later, Richard II had the castle converted into a royal palace.

It was notoriously used as a prison for 7000 prisoners during the Napoleonic Wars in the 19th century.

Porchester castle is the site of a Roman fort dating back to the 3rd century. A medieval castle was built using the remainder of the fort in the 11th century following the Norman conquest. Soon after its construction, the castle passed on to the hands of the English monarchs in 1154 when Henry II ascended the English throne.

It remained in royal ownership for many subsequent centuries. The castle was initially built for military purposes and over time, many structures such as additional towers and gun platforms were added to augment its defenses. Lavish residential quarters were also built in it to serve as the royal residence during the frequent visits of English monarchs.

In the 17th, 18th, and 19th centuries, the keep of the castle was frequently as a prison. Today the castle hosts many exhibits of medieval times and is often used for educational and recreational events.