A knights horse was called a destrier in medieval times and was a knights most prized possession together with his sword and Armour, they were also known as warhorses. Medieval knights would usually have more than one horse which were all trained with a specific purpose in mind. Knights horses were specifically bred from good horse stock that had been identified as having the ideal attributes needed to be Medieval knight horse. Medieval Knights horses were also known as the “Great Horse”, they were invariably short backed and broad chested stallion horses that were usually picked for their strength, stamina and speed.

“a man’s boldness, a woman’s movement, a fox’s trot, a hare’s eyes and an ass’s strong legs” – medieval text describing the attributes of a knights warhorse.

Knights had horses that were trained as battle horses and they would be able to cope with the noise and violence of the medieval battlefield as they were trained specifically for this purpose. These warhorses were fearless and nimble in the charge. Knights also owned horses called palfrey’s which were basically work horses that knights liked to use for traveling to different places, the packhorse was another horse owned by the medieval Knight, it was a pack horses job to carry the heavy baggage and supplies of a medieval knight. 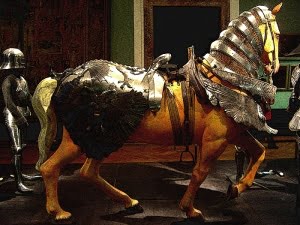 This horse is wearing a full suit of expensive horse armour

As he was learning how to fight with various weapons on hos way to becoming a knight, a page and then squire would also spend most of his early years training in the mastery of horsemanship, medieval knights built strong bonds with their horses during this time. Metal spurs were attached to the heel of medieval Knights Armour and were used to control the horse and to urge on the horse, the spurs were recognised emblems of knighthood. Knights horses were trained to avoid weapons through twisting techniques and were taught how to attack footsoldiers by trampling on them. A Warhorse could get realistic training and experience of battle in medieval tournaments.

Only very wealthy medieval people such as knights could afford expensive horse Armour, medieval horses were very vulnerable to attack from footsoldiers who would stab them in the belly or try to chop their legs which meant that Medieval Armour for knights horses was however the most important of all armour for a horse was called the chamfron (also spelt chamfrein and shaffron) which protected the horses face, if a medieval knight could only afford one piece of Armour it would be the chamfron that he would choose.

The following warhorse Armour parts would have been used during the medieval period: 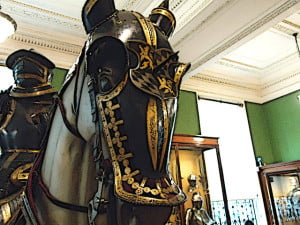 Medieval warhorses were usually owned by wealthy members of medieval society such as barons and knights who were considered to be the elite of the army. This group of troops was called the cavalry or the heavy cavalry and were most medieval armies main weapon.