Various breeds of horses were used by medieval knights. The best-known of these breeds was called a Destrier which accompanied a medieval knight to battlefields and various tournaments. It was also known as “great horse” as it was the most important depiction of a medieval knights warhorse. For general travelling purposes, other breeds such as Palfrey and Ambler would accompany the medieval knight.

How did a Medieval Knight Train his warhorse

Special attention was paid to the training of a medieval knight’s warhorse. Since two of the most important components of the life of a medieval knight on a warhorse were battlefield and individual combat at tournaments, the warhorse was specifically trained for these purposes. The warhorse was also trained to trample the bodies of the fallen enemies on the battleground in addition to being trained for biting and kicking when commanded. 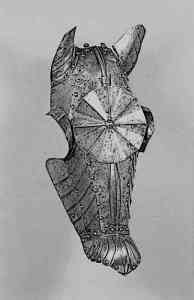 A Medieval knight and his warhorse went into battle multiple times in his life since wars were common during the medieval times. The medieval warhorse that was most commonly used was called a Destrier. It was the sturdiest and most active of all horses and therefore was preferred on the battleground. This warhorse was brought to England by William the Conqueror after the famous Norman Conquest of England in 1066.

A Medieval knight on a warhorse was one of the most essential elements of a medieval battlefield. Training of the knight’s warhorse was specifically carried out to accomplish different tasks during the battle. In the event of a battle, for instance, the horse was trained to trample the bodies of enemies on the battlefield and even bite and kick when ordered by his owner. Since a medieval knight in a battlefield had his Armour and shield with him, the warhorses needed to be massive with a lot of stamina to bear the burden of the weight of his master, his armour and weaponry and needed to be able to understand and carry out his commands, only years of intensive training of a warhorse could accomplish this.

The image of a medieval knight on a warhorse was particularly significant in that special Armour was used for the horse. The Armour of the horse was made of steel and leather and was called “barding”. Body parts of the horse that was generally armoured were neck, head, and chest. Additionally, the rear of the horse was covered with a padded cloth made of leather.

Special types of horse breeds were used for a medieval knight on a horse. These breeds have generally become extinct although some of them such as Clydesdales and Quarter horses have been reproduced in the recent times. The horse, before accompanying his master to the battlefield, was highly decorated and in addition to barding, medieval warhorses were covered in a special kind of ornamented cloth called a trapper.