He was the son of the Henry II of England and Eleanor of Aquitaine.

This medieval king also ruled as the following

He was also famously known as ‘Richard the Lionheart’ due to his bravery and greatness as a military fighter.

King Richard I was born on 8th September 1157 at Beaumont Palace, Oxford, England. 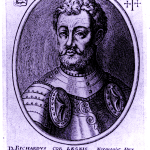 What kind of Ruler was Richard the Lionheart

Richard the lion heart was a brave, fearless and an able military leader and a fighter.

Among his contemporaries, he was considered a generous ruler and a king who was also a knight.

Among the medieval kings, it was the first instance of such combination.

However there was also a group who believed that King Richard I although a great fighter, was a bad son, husband and a King.

He was also criticized for taxing the clergy to collect funds for the crusades and ransoms.

What was King Richard I Famous For?

King Richard I was famous for being a great military leader and a warrior.

This was the reason why he was also known as ‘Richard the Lionheart’. He was also famous for his terseness and was known as Oc e No, meaning Yes and No, in Occitan.

King Richard I was nicknamed as Richard the Lionheart because he was very brave and great military leader and warrior.

He was the main Christian commander during the Third crusade and scored important victories against his Muslim counterpart Saladin.

His bravery was acknowledged by the Muslims as well.

King Richard I along with his two brothers revolted against their father, Henry II in 1173.

It was believed that they were manipulated by their mother, Eleanor to initiate a rebellion against their father.

Geoffrey and Richard joined Henry and at the French court the they took the oath that they would not establish friendly relations with their father without Louis and French barons’ consent.

With King Louis support the three brothers gathered support at their individual level and were successful early on. In order to crush the rebellion, Henry II mustered up an army of almost two thousand mercenaries.

Initially Henry II offered peace to his sons, but they refused on the advice of Henry – a War was fought and King Louis was defeated.

They signed a peace accord in September 1174 which terms did not include Richard.

Richard went to his father’s court on 23rd September, fell to his knees and asked for forgiveness.

Henry gave him the Holy kiss and later reconciled with Richard along with his brothers. 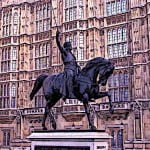 King Richard I participated in the Third Crusade as the main commander.

He led the campaign after the Phillip II of France had departed and captured the most important cities of Acre and Jaffa.

These were King Richard I’s great victories against his Muslim counterpart Saladin but he couldn’t capture the Holy City of Jerusalem.

He also made a settlement through which access to Jerusalem was provided to Christian pilgrims and ensured their safety.

King Richard I and Saladin fought multiple battles during the Third Crusade.

Richard I fought bravely and won many battles against Saladin, most prominent of which were the Battles of Arsuf and the Battle of Jaffa.

Richard I wanted to negotiate with Saladin on many occasions, but was unsuccessful as although Saladin’s forces were defeated but weren’t completely destroyed.

On 2nd September 1192 they finally reached a settlement.

Before going on the Third Crusade, King Richard I married Berengaria of Navarre on 12th May 1291 at the Chapel of St. George.

King Richard took his wife on the crusade and kept her with him but for a short period of time.

They both returned separately and were then never reunited and they never bore any children. 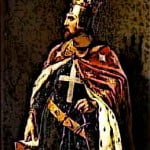 King Richard I landed and captured the city of Acre.

King Richard I had 2700 prisoners and wanted Saladin to surrender, but negotiations didn’t go ahead.

Richard advanced and then defeated Saladin’s forces in the Battle of Arsuf.

Although the Muslim Army suffered a considerable amount of casualties, but wasn’t destroyed.

Richard was again unsuccessful in his attempt for Negotiations.

Richard’s forces also defeated Saladin’s forces in the Battle of Jaffa. After this they both negotiated and finalized a settlement that was in the interest of both parties.

In 1292 while King Richard I was returning from the crusade, he was captured by Leopold V, Duke of Austria.

Richard was handed over to Henry VI, the Holy Roman Emperor on 28th March 1293 who kept him as a prisoner in Durnstein Castle.

The amount was arranged and transferred to Germany and finally Richard was released on 4th February 1194. 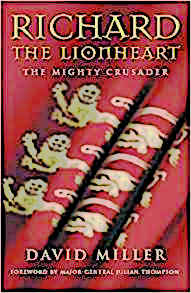 After a month of King Richard’s return to England, he went to Normandy in order to fight against Philip II.

He remained busy in intermittent fights against Philip II in the remaining years of his life and never returned to England.

He got fatally injured while he busy in besieging the castle of Chalus in France.

He died on 6 April 1199 and was buried at Fontevraud Abbey, Anjou, France. 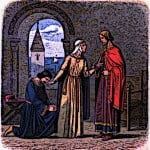 Medieval King Richard the Lionheart with his brother John

King Richard I one of the bravest Kings of the middle Ages.

He fought bravely in the 3rd Crusade and recorded many splendid victories against the Muslim Armies.

He is remembered as ‘Richard the Lionheart of England’ due to his bravery.