Many different types of short swords were used across Europe during the medieval period. Some of these were put to a more everyday cutting use while others were used as primary or secondary weapons on the battlefield.

A short sword had the advantage of being relatively light-weight and easy to wield. However, when facing an opponent armed with a longsword, a person wielding a short sword was often at a disadvantage due to his inability to wield the sword within the opponent’s reach.

This was one of the reasons why short swords were typically hung on the side as a reserve by the cavalry and more often by the medieval infantry. Another significant use of short swords during the medieval period was as a civilian weapon in medieval cities and towns, frequently used in feuds and street fighting.

A seax was a short sword that was wielded by the migrating Germanic tribes, especially the Saxons, during the early medieval period. The design of a typical seax comprised of a notched and an overall curved blade.

Different types of seaxes were wielded by the Saxons as the migrated to portions of Britain and northern Europe in the early medieval period. These included broken-back seaxes, narrow seaxes as well as longer variants of the weapon.

The blade of a seax was typically inserted into a wood or horn hilt. It is historically unclear as to whether the seax was used for daily slashing and cutting or was put to effective use on the battlefield by the Saxons. The use of the seax declined soon after the Saxons settled in medieval Britain. 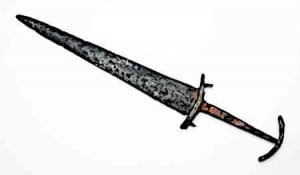 A baselard was a type of short sword which came into popular use during the late medieval period.

A baselard was a type of short sword which came into popular use during the late medieval period. This weapon began to be used in medieval Europe in the 14th century and was more common in civilian hooliganism rather than on the battlefield.

Historical sources mention outlaws carrying the baselard as a common sidearm on street feuds. Towards the end of the 14th century, the weapon had come into wider social acceptance and had become a part of the fashionable dress of the era. The use of the baselard continued until the 16th century.

A falchion was a type of short sword which was used in different parts of Europe from the 13th century until the 16th century. Its design comprised of a single-edged blade and a hilt which was meant for single-handed use. Towards the culminating of the blade, a slight curve marked most of the medieval falchions.

This type of medieval short sword bears a close resemblance to the machete and the medieval Persian shamshir. Turkish and Mongol attackers reaching European borders also contributed to the evolution of this particular type of sword. Although popular used on the battlefield, the falchions were also used for cutting purposes, replacing the ax for domestic use. They were more commonly used by the peasants but extant historical sources also mention falchions being used by the notable noble families of the 16th century.