This change in circumstances was no more evident than in the battle of Crécy in 1346 in which the English Medieval crossbow men destroyed the best Knights that France could offer.

Medieval foot soldiers were military men that fought on foot (ground troops) such as crossbow men, longbow and pike-men. Improvements in armour making, training and tactical awareness for foot soldiers made them a serious threat to the previous domination of the battlefield by Medieval Knights.

It would be at the battle of Crécy where foot soldiers used as tightly packed longbowmen this would be best illustrated as the longbow men destroyed the French knights killing literally thousands them in a rain of arrows. 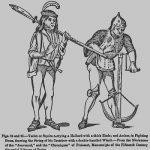 The addition of crossbows to the arsenal of medieval footsoldiers was significant, now footsoldiers could attack the enemy whilst keeping out of harms way their weapons. The crossbow was a powerful and relatively easily to to load weapon that had a winding back mechanism and handle that needed less training and strength to use than the longbow.

The crossbow was popular with foot soldiers in Europe and was a dangerous weapon on the battlefield. Crossbowmen could fire two metal tipped arrows at the enemy in around a minute, and although this weapon was not as effective as the longbow, the deadly missiles it could fire ripped through a knights armour leaving him vulnerable on the battlefield.

However the was a range of specialist arrows developed for the longbow that could inflict different kinds of damage to an enemy, there were bodkin arrows that could penetrate a knights armour and flesh piercing Broadhead arrows amongst others.

Military leaders discovered that thousands of tightly packed footsoldiers with longbows could fire an unrelenting hail of arrows into the sky that would rain down on the Medieval Knights below with devastating effect. Thousands of arrows would literally make a hissing sound as they darted across the sky and honed in on enemy knights.

Foot soldiers would spend many years training to use the longbow and were eventually able to fire up to 10 arrows per minute against the crossbows 2 per minute; they could hit a target from around a distance of 250 m. Medieval Knights were sitting ducks and their horses were also killed or wounded and sent into a panic that made them harder to control on the battlefield.

Spears and Pike weapons (long spears with spike ends) were also a very effective weapon that was used well by footsoldiers, these weapons were also improved and re-designed as the medieval period progressed.

Spears and Pike weapons had a very long handle sometimes up to 20 feet long and special formations were developed for the foot soldiers in which they would create pike formations to create a wall of spears or spikes. Medieval Knights cavalry charged would be made ineffective as they could not get near to the enemy and they would be easily brought down as their horses were killed as they ran onto these weapons. 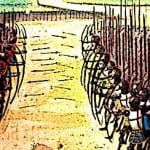 Medieval Footsoldiers Crossbowmen in the Battle of Crécy

How Foot Soldiers won the Battle of Bannockburn

It was another famous battle that showed how the previously dominant medieval knights could be defeated by a well armed and organised group of foot soldiers. In the battle of Bannockburn King Bruce the Scottish king was outnumbered 3 to 1 by the English Kings army and it looked on paper as if the English would win easily and the Scottish army would be destroyed by the superior English forces.

The English had a large cavalry which should have been a major advantage, however the cavalry were brought down by wall of Spears by the well organised foot soldiers of King Bruce were grouped into close formations as the cavalry charged, these foot soldiers waited in formation with their long Spears (pikes).

The English cavalry was decimated and they were slaughtered in the muddy marsh lands. These type of foot soldiers were commonly known as pikemen in England and had other names in different countries.