Medieval dragons were legendary creatures in medieval folklore and methodology.

There are various tales and poems depicting dragons and they appear in the folklore of many cultures around the world.

The Roman poet, Virgil, in his poem Culex mentioned a shepherd having fight with a constricting snake and calls it “serpens” and “drago” showing these two were interchangeable at that time.

The medieval dragon, as per the legends, was generally found in an underground lair. 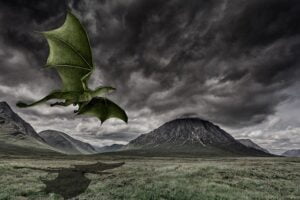 Dragons were portrayed as an evil creature in the western medieval folklore. In Bulgarian, Russian, Ukrainian, Bosnian and Serbian lore, dragon-like creatures were regarded as evil.

In the middle ages, numerous stories were used to portray them as the bearer of evil and death.

Artistic depictions of dragons varied from one artist to another and from one time period to another.

Some were huge; some were large while some breathed fire.

In a famous Christian story, a Roman soldier Saint George saved a princess from the dragon. He then brought the helpless dragon to the villagers and demanded that they convert to Christianity or get killed by dragon. The villagers chose the former – Saint George then slayed the dragon.

In the famous work of Geoffrey of Monmouth titled “Historia Regum Britanniae”, he mentioned a child prophet Merlin who witnessed the Romano-Celtic warlord building a tower on Mount Snowdon to keep it safe from Anglo-Saxons.

Merlin informed him that underneath the foundation, there is a pool with two dragons sleeping in it.

Upon draining the pool, red and white dragons were exposed who started fighting. Merlin gave the prophecy that the white dragon will won hence symbolizing the English conquest over Wales.

He also prophesized that the red dragon will eventually return and defeat the white one.

In the 13th century work “Golden Legend”, it is written that a virgin martyr was thrown to a cell after being tortured because of her faith in Diocletianic Persecution. There she confronted a dragon but she made the sign of cross and the dragon vanished. 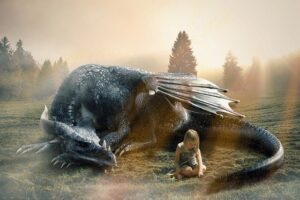 Use of Wyvern Dragon Symbolism in Heraldry

Dragons were very popular in medieval heraldry. Heraldic dragons could have varying number of legs but by the late Middle Ages, heraldry dragons were classified as Wyverns (with two legs) and Dragons (with four legs).

Wyverns and dragons are the most common heraldry symbols in middle ages. Most dragons were considered as evil but it is also shown as the symbol of valor and protection.

The late middle heraldry also distinguished “cockatrice”, a dragon like creature that is so poisonous that its breath and gaze are both fatal to any living being. 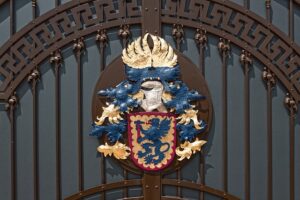 In Greek methodology, dragons often guard treasure of the castle and are associated with a great hero who tries to slay it.

In folklore tales, dragon’s blood has magical power that keeps them alive for a long time and gave them poisonous properties.

Dragons also loved gold and other shiny objects as per their medieval descriptions, and sought after the treasure hordes.