The history of Ballista can be traced back to ancient Greek when it was built for Dionysius of Syracuse in 4th century BC. The Greeks made it using two weapons called oxybeles and gastraphetes. Its shape, however, was relatively primitive compared to the medieval siege weapon. The use of Ballista is also found in ancient Rome where it was extensively used during battles. Subsequently it became an important medieval siege weapon. 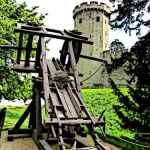 The word Ballista is derived from the Greek word “Ballistes” which meant “to throw”. This was because of its purpose which was to throw large stones or missiles while attacking a fortification or a castle. During the early medieval times in England, ballista was also known as Ingenium which in Latin means “ingenious device”.

Ballista was a very effective medieval siege weapon and was primary used by the attacking army to throw large stones in order to damage the castle walls. However, it could also be used by the defending armies to throw various missiles on the attaching armies and kill the people. Defenders had an added advantage because they could place the ballista on the top of the castle walls and thus have better range. The attackers usually mounted it on a wagon for easier mobility.

The design of a medieval ballista was quite sophisticated with a variety of parts acting in conjunction. For instance, it had two torsion springs which were mounted in a frame and each connected with a throwing arm. The throwing arms were connected with a rope that adjusted them into the firing position. A winch was used to pull the bowstrings back. Thus for its time the ballista was a quite sophisticated medieval siege weapon. 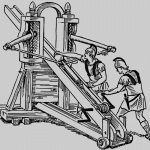 One of the most important types of ballista, which was a supremely important medieval siege weapon, was called a springald. It was similar to a large crossbow and consisted of vertical springboard which was fixed to a timber frame at its lower end. The springboard served the function of a lever and the device was strong enough to launch missiles across hundreds of yards.

We hope you enjoyed the information in this article on the history of the ballista weapon how it was used and what they ballista was used for, you can find other articles on this website on similar siege weapons to the ballista by following the links at the bottom of this ballista siege weapon page.