He succeeded the throne after the death of his father, Henry II.

Before that, he had ruled as the Duke of Normandy, Duke of Aquitaine, Count of Anjou, and had other titles. During the Third Crusade, he also served as the central Christian commander.

Origins of the Name Lionheart

Contrary to the popular perception, the title of “lionheart” was given to Richard I much before his accomplishments during the Third Crusade.

He was given the title during the successful siege and capture of Castillon-sur-Agen which was the castle of nobles who had rebelled against Henry II.

Subsequently, he received various other victories which made the title a permanent part of his name. 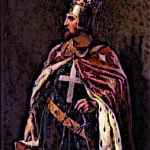 Richard I aka. Richard The Lionheart is ready for battle during the crusades

Richard the Lionheart was born on 8 September 1157 and assumed the command of his army at the young age of 16. He excelled himself in various military commands under his father, Henry II, and later on against him.

He also led the Third Crusade as the commander and earned fame with his feats against his Muslim counterpart, Saladin. Richard the Lionheart died on 6 April 1199 at the age of 41.

Upon hearing the news of the fall of Jerusalem to Saladin in 1188, Richard the Lionheart decided to leave on a campaign to the Holy Land along with Philip II. They both arrived in Sicily in September 1190 and then went on to conquer Cyprus in April 1191.

He arrived in the Holy Land on 8 June 1191 and led some successful expeditions, although he failed to recapture Jerusalem from Saladin. 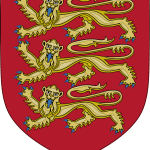 Richard The Lionheart Coat of arms – KIng Richard I

Richard the lionheart and Saladin

Richard the Lionheart engaged Saladin in various battles during the Third Crusade and they both came to respect each other as great military leaders. However, they never met each other in person.

Upon learning that Richard’s horse had been killed on the battlefield, Saladin sent him a new horse as a gift. On one occasion, he also sent fresh water and fruit to Richard when the latter was suffering from fever.

One of the most interesting facts about the life of Richard the Lionheart is that while he ruled over England for over a decade, he actually lived less than a year in England and spent most of his time in France and on military expeditions. Richard the Lionheart also had a fear that his sons might turn against him and so didn’t allow them to have swords. 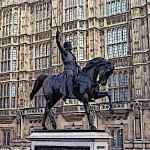 Statue of Richard the Lionheart outside Westminster parliament

The death of Richard the Lionheart occurred under very peculiar circumstances. It was caused from an infection that resulted from an arrow wound.

He sustained this injury during the siege on an unimportant French castle when he was walking around without wearing any protective chain mail and died 10 days later. Thus came the unremarkable end of his extraordinary life.

Richard I, also known as Richard the Lionheart, was the King of England during the 12th century. He became the king after the death of his father, Henry II, and took part in various expeditions, most important of them being the Third Crusade. He died from an arrow wound during the siege of a French castle.

Richard the Lionheart: The Crusader King of England Hardcover – July 1, 2018

Richard the Lionheart: A Life From Beginning to End Paperback – September 20, 2017

Learn More about Richard the Lionheart at Wikipedia