Edward the Martyr was the king of England from 8 July 975 – 18 March 978. He was the eldest son of the King Edgar the Peaceful whereas the identity of his mother is unknown and either Æthelflæd or Wulfthryth was the mother.

After the death of Edgar the Peaceful, the English throne was contested between the supporters of Edward’s and those that were supporting Æthelred the Unready, Edwards’s younger half-brother of being the rightful king.

Edward was not the acknowledged heir of his father, whereas Æthelred the Unready was acknowledged as the legitimate son of Edgar. 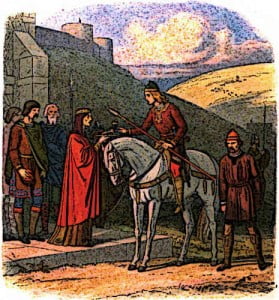 King Edward the Martyr was very young when his father, King Edgar died in July 975. The death was sudden and there was almost no preparation for the heir as the two young sons were left behind to contest the throne.

Æthelred was supported by his mother Ælfthryth, Ælfhere, Ealdorman of Mercia and Bishop Æthelwold of Winchester. Edward’s supporters were more persuasive and as a result, he was crowned, but he would only live for another three years as he was killed in March 978. Æthelred succeeded King Edward.

After Edgar’s death, England was struck by many calamities. As King Edward was very young, so control of the government wasn’t in his hands and others were taking decisions on his behalf.

Oslac of Northumbria, one the most experienced Ealdorman was exiled. A Number of new, unknown ealdormen were appointed to different positions. Edwin, Æthelmær and Æthelweard were the three prominent ealdormen.

The secular clergy also tried to revive itself during Edward’s tenure as King. As a result, several disputes among the nobility started to appear and at one point Ælfhere and Æthelwine came very close to open warfare.

Very little is known about the King Edward’s short reign as compared to his father and half-brother Æthelred but the general perception is that royal authority was reduced in the midlands and north.

King Edward the Martyr was murdered on 18th March 978. He was murdered at the time of evening while he was visiting Ælfthryth and Æthelred.

Edward’s body remained at the Wareham for a year when Ælfhere, as a gesture of goodwill, initiated the process of reinterment.