The Black Death was a widespread pandemic that hit nearly all of Europe in the 14th century, taking a huge toll.

A major portion of the populations of all affected countries were devastated, many cities became depopulated and the pandemic cast a lasting impact on the overall outlook of the society in different countries.

The Black Death is also know by the names of ‘The Great Plague’, ‘Black Plague’ or Simply ‘The Plague’

‘The Black Death’ was a name given to the diseases in more recent times.

At the time of its outspread, it was called “The Pestilence” or “The Great Mortality” in view of the frequent deaths which occurred because of it.

The Black Death took a toll of 75 million to 200 million lives. For medieval times, this was an exceptionally large number and a significant portion of the total population of the world.

It is estimated that Black Death killed 30% to 60% of the European population.

The estimated global population before the Black Death was estimated at 450 million. After the deaths caused by the pandemic, the total population of the world was reduced to nearly 350 million.

In the city of Siena in Italy, the Black Death caused half the population to die.

It was a time when the construction of a cathedral which was meant to be the biggest cathedral in the world, was ongoing.

The cathedral was never completed and stands incomplete even today.

In Paris, France, an estimated 800 people died every day of Black Death when the plague was at its peak in the city. 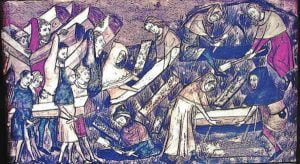 In England, Black Death killed nearly half the population.

The sharp decline in population led to a decrease in labor power and consequently, an increase in the wages of the available workers.

Did any Countries or Regions escape the Pandemic?

Countries and regions which had limited trade relations with other parts of Europe suffered relatively little from the Black Death.

These included the Kingdom of Poland and isolated villages in remote regions.