Vikings were famous as raiders who launched attacks on European coasts from 800 A.D. onward.

They were warriors and traders hailing from Scandinavia. Their attacks on the coasts of European mainland and British Isles led a lasting impact on the culture and history of these areas.

In northern France, the Vikings eventually formed settlements and became permanent residents. This led to the creation of Normandy, after the Normans who descended from the Vikings.

In the British Isles likewise, Vikings came to dominate the coastal lands and established inland kingdoms as well. Following are some of the key battles fought by the Vikings. 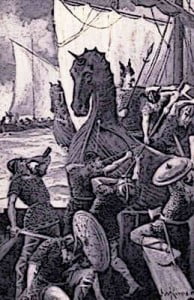 The Battle of York came about when the Great Heathen Army of the Vikings reached England in 865 A.D. This army was led by the Viking leader Ivar and first came to East Anglia.

The people of East Anglia sued for peace and agreed to provide the army with provisions. In winter the next year, Ivar and his army marched north towards the kingdom of Northumbria.

The Northumbrians didn’t expect an attack in the winter and were taken by surprise. In the ensuing Battle of York, they were routed and the Vikings effectively took over York.

The battle was a victory for the Vikings and would mark the end of the Northumbrian kingdom.

The Battle of Edington was fought in May of 878. It took place near Edington in Wiltshire. The battle was fought between the Great Heathen Army of the Vikings and the Wessex troops under Alfred the Great.

The Heathen Army had been plundering the countryside and was previously victorious in the Battle of York. When this army came up against the Wessex forces of Alfred, it was soundly defeated. The Viking leader Guthrum agreed to be baptized and convert to Christianity.

This battle was fought on December 31, 870 AD. It was fought between Vikings and the West Saxons. It took place near Englefield, Berkshire. Before the battle, the Vikings had occupied the kingdom of Wessex.

They camped at Reading and then rode towards Englefield. The Vikings were led by Sidrac and the Aethelwulf of Berkshire was the leader of the West Saxons. The West Saxons were successful in this battle and the Vikings were defeated with heavy losses.

This battle was fought on 8th January 871 AD at North-West of Reading in Berkshire. The contestants of the battle were the English inhabitants of Wessex against Viking invaders from Scandinavia.

In 870, the Danes sailed up the river Thames towards reading in Berkshire. They conquered Reading as the English soldiers were celebrating Christmas.

The Danes arrived there around 28 December. The English army was driven away towards Englefield, some six miles from Reading. The Vikings followed the English army and were badly defeated at Englefield. They headed back to Reading.

The Viking army attacked again and met the Anglo-Saxon army 11 miles from Reading. In the battle that was joined, the Vikings were once again defeated by the Anglo Saxons under Alfred the Great who was only 22 at the time.

The Battle of Brunanburh was fought in 937. It took place between the Anglo-Saxon Kingdom of England at one side and the kingdoms of Dublin, Scotland and Strathclyde at the other side.

The English forces were led by Aethelstan, regarded as one of the greatest Anglo-Saxon kings. The Kingdom of Dublin was led by Olaf Guthfrithson, a Viking leader.

Although Vikings were primarily allied against the English forces, Aethelstan was able to recruit some Vikings mercenaries to fight on his side as well.

The Battle of Brunanburh is regarded one of the greatest battles involving Anglo-Saxons. It resulted in a decisive victory for the English, although casualties were heavy on both sides.

The Battle of Maldon was fought on Aug 11, 991 A.D. Unlike other battles this was a comeback of Viking forces. It was fought between Saxons and victorious Viking raiders during the invasion of Britain.

The Saxon commander was Ealdorman Byrhtnoth while the Viking force was led by Olaf Tryggvason or Svein Forkbeard. Byrthnoth decided to fight the Vikings despite having fewer men in comparison.

The battle resulted in a decisive Viking victory. King Aethelred then decided to pay 10,000 Roman pounds of silver as a tribute to the Vikings.

Brian Boru’s forces were victorious. Thousands of warriors on both sides were killed. King Brian Boru was also killed in this battle.

In this battle the Danish army won and the Vikings became dominant in England. The Danes retook the English territories. King Edmund was forced to sign a treaty with Cnut after the battle. Almost all of England was controlled by Cnut except Wessex.

This battle was fought at the place of at the village of Stamford Bridge, East Riding of Yorkshire. It was fought between the forces of King Harold II of England and a Viking army led by King Harald Hadrada of Norway.

The battle was joined on September 25, 1066. In this battle, the Viking leader was killed along with most of the Norwegians.

This battle symbolized the end of the Viking Age.

The English army won the battle and Vikings were killed in huge number in this bloody battle.

The surviving Norwegians were allowed to go back including the son of Harald Hadrada.