This period was marked by disintegration of the Carolingian Empire and West Francia.

The royal control by House of Capet was expanded including their struggles following the Vikings invasions.

This period also witnessed the hundred year’s war with the kingdom of England with the catastrophic ‘Black Death’ part of this war.

The 12th century saw the ups and downs of the economic system and the feudal revolution. There was a cultural shift that included transition from Romanesque architecture to Gothic architecture, Gothic art, universities, poetry and medieval music. 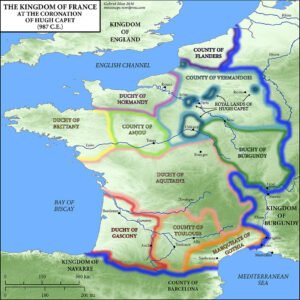 Clovis was the first king of Franks who united all Frankish tribes under one ruler. He changed the dynamics of Frankish leadership, effectively laying the foundations of a ruling dynasty so that one king could pass the throne to his heirs.

Clovis was the founder of Merovingian dynasty which started from middle of 5th century until 751. He succeeded his father Childeric I and ruled areas extending from Southern Netherlands to northern France.

He also conquered small Frankish kingdoms in northeast and Visigothic kingdom of Aquitania to the South. Clovis was famous because of his conversion to Catholicism in 496.

Clovis is considered as the founder of France.

The Battle of Tours took place on 10 October 732 between Frankish and Burgundian forces led by Charles Martel against Umayyad Caliphate led by Abdul Rahman Al Ghafiqi.

It was won by Frankish and Burgundian armies and Abdul Rahman was killed. After the victory, Charles extended his kingdom in the South.

This battle laid foundation of the Carolingian Empire which led to the Frankish dominated empire in western and central Europe for the next century.

At the same time, this battle decisively halted the expansion of the Umayyad Hispania.

For this reason, Martel was celebrated as the savior of Christianity and gained the favor of the Papacy.

Charlemagne or ‘Charles the Great’ became the king of Franks in 768. He also became the King of Lombards from 774 onwards and the Emperor of Romans from 800.

He was crowned by Pope Leo III on Christmas Day in 800.

This was the first time a person had become an effective emperor in Western Europe following the fall of the Roman Empire.

In this position, Charlemagne claimed to be the heir to the original Roman Empire.

After his coronation, he introduced a common currency and written language in Francia.

He also took steps to encourage the growth of a unique Frankish culture, comprising of literature and art. During his reign, he united most of the Western and Central Europe in a single entity.

The extended Frankish kingdom came to be called the Carolingian Empire.

He removed Lombards from Northern Italy and led an incursion into Muslim Spain.

His achievements would define the Western and Central Europe for centuries to come.

After the death of Charlemagne, his son Louis the Pious became the ruler of the Carolingian empire.

During his reign, Louis divided the kingdom among his sons while they still remained under his greater rule.

The title of the emperor was given to the eldest son of Louis the Pious, Lothair I.

However because of the various sub divisions, he became less powerful. When Louis the Pious died in 840, his son claimed the power as an emperor.

Lothair’s brother and half brother refused to accept him as emperor and declared war on him. They defeated Lothair after which both sides agreed to negotiate a settlement.

The Treaty of Verdun was signed on August 843 to divide the Carolingian Empire into three states for three sons of Louis the Pious.

He was the son of Hugh the great and was nephew of Otto the Great. He was elected and crowned on 3 July 987.

After getting the crown, he immediately started pushing for the coronation of his son Robert. Robert was crowned on 25th December on the same year.

Hugh Capet was regarded as the founder of the Capetian dynasty and House of Capet.

His successors would continue to rule France for many subsequent centuries.

His predecessors were known as kings of the Franks but Philip replaced ‘Franks’ with ‘France’ in his title.

was the son of King Louis VII and Adela of Champagne.

After a long struggle of the Anglo-French war of 1202-4, Phillip successfully broke up the Angevin Empire at the Battle of Bouvines in 1214.

His military successes helped in the expansion of France Southwest.

During his reign, Phillip transformed France from a small feudal state into the most powerful country in Europe.

He also significantly pushed the boundaries of his kingdom at the expense of his neighbors.

The Albigensian Crusade was a military campaign that lasted for nearly 12 years.

It was initiated by Pope Innocent III in France to eliminate Catharism in Languedoc.

It resulted in eliminating a significant number of Cathars and reduced the influence of counts of Barcelona as well as Languedoc’s regional culture.

The Cathars originated from the anti-materialist reform movement from the churches of Balkans.

It was a reaction to the increasingly materialist outlook and interests of the Catholic Church.

The practices of the Cathars conflicted with the Incarnation of Christ which led to accusations of Gnosticism.

In 1208, Innocent Pope III declared a crusade against Cathars. From 1209 to 1215, crusaders were successful in capturing Cathar lands.

The Battle of Bouvines was fought between a Flemish-English force and the French army.

It took place in the County of Flanders in 1214.

This battle resulted in a decisive victory for the French forces under Philip II.

Many English-Flemish barons were killed or captured.

The allied side also sustained heavy casualties, mainly caused by the repeated charges of the French cavalry.

With this victory, France emerged as the single most powerful nation in Europe.

Back in England, the prolonged war and the crushing defeat created discontent among the barons which ultimately led to the signing of Magna Carta.

The 100 Years’ War was a series of many wars fought between the Kingdom of England and the French House of Valois over the right to rule the Kingdom of France from 1337 to 1453.

It was one of the most notable conflicts of the middle ages in which five generations of kings fought for the largest kingdom in Western Europe.

At the end of the war, feudal armies were replaced with professional troops and weapons of armies.

However, England was ultimately defeated in the war and French victory ended a long period of instability.

Medieval France Francia – This war also laid the foundations for a long rivalry between England and France that would continue for many centuries to come.

The French Wars of Religion began in 1562 and continued for nearly 36 years all the way until 1598.

The war was caused by a conflict between adherents of Catholic faith and Huguenots.

The French nobility was also divided along two sides during this conflict.

The Catholic populace carried out several killings of the Huguenots.

In all, nearly 3 million died due to the violence caused by this war. This made it the second deadliest religious war in French history.

His reign was the longest time of any monarch of sovereign country in Europe.

He eliminated feudalism in parts of France and brought a system of absolute monarchical rule which ultimately led to the French revolution.

During his long reign, he fought three wars; the war of Devolution, the war of the League of Augsburg, and the War of Spanish succession.