The medieval jester was a regular part of the royal court where he was meant to entertain those present. Specifically, it was the jester’s job to bring a smile to the King’s face and to lighten up things at different occasions such as in court, at meals and during the feasts.

To make this happen, a jester typically dressed accordingly in a way which was funny and caused onlookers to feel amused. A wide range of dressing accessories were used by the jesters to aid them in their job of entertaining an audience. 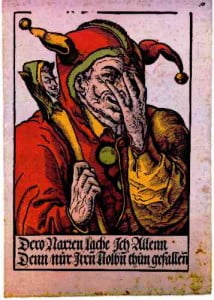 A medieval Jesters distinctive hat was called the “fools hat”

From head to toe, a medieval jester looked a part of his job of entertaining. The head of a medieval jester was typically shaved. During the early medieval period, a jester would wear a hat with the ears of an ass on top of the shaved head.

Towards the later medieval period, jesters began wearing a monk’s cowl on their head which fell over the shoulders and gave them a comical look. By the late medieval period, a standard type of hat, called the “Fool’s hat” had become popular among court jesters. This type of hat comprised of three points protruding in different directions with a bell attached to each point so that the hat jingled whenever the jester bobbed his head.

Medieval jesters typically wore a coat which was made from motley colours, usually bright and patterned irregularly. Under this coat, the jester would typically wear tight breeches which were of a similarly bright colour.

In many cases, one leg of the breeches was coloured differently from the other leg to give it a more comical look. Another distinctive feature of a medieval jester’s attire was a special sceptre known as the bauble. The jester put this bauble to various uses, from appending a mock-head to its end to wielding it in the imitation of a monarch.

Towards the later medieval period, dressing elaborately became a part of the role a jester had to play in entertaining. This resulted in the use of gaudier clothes, often using mismatched colour schemes and different comical embellishments added to the clothes. The evolution from the hat with ass ears to the three pointed hats is a classic example of the evolution that took place in the jesters clothing over the course of the medieval period.