The Medieval times was a period characterized by conservatism and high moral and spiritual values. As the era lasted for many centuries in Europe, it was natural for fashion to change with the changing times. Clothing styles were heavily dependent on existing cultural traditions, social status and availability of raw materials and there were fashion changes during different medieval periods.

People in the Medieval times were limited to a few fabrics. Though clothes of that era went beyond animal skins, burlap and wool, softer and finely woven fabrics were more expensive and difficult to purchase. The high costs meant that poorer medieval people had to settle for more uncomfortable and heavier medieval fashion clothing material items.

Cotton, fur, hemp, leather, linen, silk and wool were the most common types of medieval fabric and they came in a variety of weights and quality. Special weaving methods were employed to produce intricate and expensive fabrics like damask, taffeta and velvet, which were spun from a blend of cotton, linen and silk. Those special types of fabric did not emerge until the latter part of medieval times.

In the Medieval era, male, female and children clothes differed by a large margin. Knights, priests, merchants, nobles and servants wore specific types of medieval fashion as a way of informing the public of their social standing or chosen profession. Medieval fashion varied depending on one’s gender, age, profession, geographical location and place in society.

The Middle Ages emerged after the Roman Empire collapsed. It began in the fifth century A.D. and ended just before the Renaissance era. Gender, work, social status and culture added variety to the types of clothes typically worn during that time and influenced medieval fashion. Anglo-Saxons, Britons, Danes and Normans wore contrasting clothing styles. The era was also marked by rapid changes in medieval men’s fashion. Individuals belonging to the lower classes were made to wear outdated and tattered garments. The social divide was further encouraged by sumptuary laws that regulated the colours and styles various ranks in the feudal system had to wear.

In the fifth and sixth centuries, Anglo-Saxon men wore tunics, trousers, leggings and strappy leather shoes along with belts and girdles to hold the tunic in place. European men’s medieval fashion in general meant that men wore multiple layers of tunics so that the one with a shorter sleeve could serve as an undershirt. Occasionally, medieval fashion trends meant that men wore togas and fur-lined cloaks. The hose would later on in the medieval period replace medieval fashion trousers. Men’s medieval fashion clothes eventually grew shorter. The Burgundian period set the trend for the medieval fashion of fitted short clothes coupled by pointed shoes, which indicated the wearer’s status symbol. Men who wore pointier shoes had a higher position in the social ladder. The tunic became narrower before it eventually transformed into the doublet. Medieval men were fond of wearing wide-brimmed hats, felt caps and hoods to protect their heads during extreme weather conditions. Gloves and mittens were likewise worn regularly.

Men who served as knights wore wrapped overcoats designed like long-sleeved chain mails. This medieval fashion attire came with a belt and buckle, upon which pouches were attached. Not for long, linen tunics fastened with metal collars were added to the whole ensemble. Knights also carried the following items: shield, helmet, sword and spear.

Clergymen protected their shaved heads under bonnets. They went on missions wearing plain-coloured garments. The outermost layer was called the chasuble, worn together with the dalmatic, tunic-like clothing with oversized bell sleeves that arched on the sides. 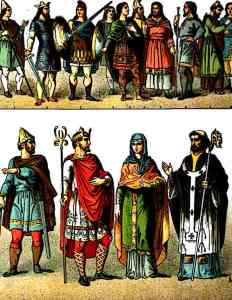 Example of medieval fashion from around the world in medieval times

Greek and Roman fashion became the model for women’s clothing style in the early Middle Ages. The clothes were tight enough to display the elegance of the female form. Women of that era wore two tunics. The second layer was usually longer and tighter than the top garment. Closed pointed shoes and long cloaks completed the look.

The gowns and sleeves (and later on coats and surcoats) of Medieval women’s fashion were always long and trailing. They were simple at first with embroidery at the edges but eventually became more form-oriented in 1200. To highlight womanly curves, tight lacing was girdled at the hip section, creating an illusion of having a long waist. Women occasionally wore long, pointy as well as high double horn headdresses.

Between the 13th and 14th centuries medieval women’s fashion became more fanciful, encrusting gold, silver, pearls and other precious stones on their gown became the norm for many Medieval women. Embroidered and lace-trimmed hats were trendy until the 15th century. Noblewomen liked wearing tall hats with dangling streamers and this was a medieval women’s fashion trend. This was also the time when women developed a fondness for long trains to their dresses which were subsequently cut short for cost-efficiency reasons. Like most medieval women’s fashion of that period, Nuns wore tunics but they never wore any colour besides black, gray and white.

Unlike adult men and women who had to dress according to their wealth or position, little children under the age of 10 enjoyed practical and functional clothes, devoid of social implications. Boys were dressed in haut de chausse, stockings worn with a pair of underpants. It was acceptable medieval fashion for boys to wear dresses until they turned 10 years of age, the age where Medieval parents started dressing them up in grown up medieval fashion items, like male adults. Girls, on one hand, wore the same types of clothes as boys and adult females. They wore long-sleeved and high-necked tunics, sometimes embroidered with cute animals and designs that matched their age.

Medieval Fashion and the Crusades

The Crusader era had a great impact on Medieval fashion. Men and women still wore tunics at this time but with a more sophisticated range of choices. Thanks to the crusades, there were more raw materials for clothes and blended fabrics like brocades, damask, satins, silks and velvets became more accessible. The crusades brought in all kinds of resources from the Far East that improved medieval fashion and the choices available. Even turbans worn by nomads were popular with the upper class, who began importing these new medieval fashion items.

Weddings during the Medieval period did not require the bride to wear a veil or a wedding dress. An evening dress sufficed and a wreath of ribbons and flowers adorned her head, giving her the final opportunity to show off her hair. Women had to cover their hair after marriage. Handkerchiefs were already fashionable then. They were invented around the mid-13th century and used by men, women and children.