Carolingian’s rose to power over the Germanic Franks in the mid-8th century and forged a vast empire that remained more or less intact until the 10th century. Carolingians were the direct inheritors of the cultural and historical remains of the late Roman Empire in Western Europe, being also the first to create an Empire of their own out of its ashes.

Consequently, Carolingian culture was significantly affected by this Roman legacy which was reflected in their clothing as well. Since Carolingians were primarily a martial dynasty which forged its rise to power and then consolidation of that power through military prowess, early Carolingian leaders and noblemen were usually military leaders and dressed as such. 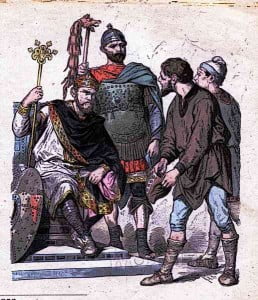 Carolingian Ruler Charlemagne’s dress, remained simple. He wore a tunic with silk fringes on top of a linen shirt and breeches. And in winters, a coat of otter skin was added to this costume.

In the earliest period of Carolingian rule, Carolingian rulers dressed rather simply and were considered more of social leaders than absolutely monarchs. During this period, a Carolingian King would typically wear a tunic made from fine material and belted at the waist.

Over this tunic, the King wore cloak made in the Roman style, with a neck-opening in the centre and the rest of the cloth falling in the front and over the back of the wearer. To cover the legs, the King wore purple leggings which denoted majesty and his royal status, together with laced shoes.

The King also carried items such as a sceptre or an orb made from expensive materials and often lined with gold. By the reign of Charlemagne in the late 8th and early 9th century and later, Carolingian rulers had attained near-absolute power as monarchs and dressed more lavishly and elaborately.

Charlemagne’s dress, however, remained rather simple. He wore a tunic with silk fringes on top of a linen shirt and breeches. And in winters, a coat of otter skin was added to this costume.

Women of the royal Carolingian dynasty as well as the Carolingian noblewomen wore rich and expensive clothes. Silk, gold work and rich trimmings were frequently used in the making of their dresses.

Although women dressed rather modestly and conservatively given the influence of Christianity on the Carolingian society, women could still utilise many embellishments in their clothing such as the lavish use of gems embroidered on their dress, expensive jewelry items and laces of gold-word bordering the clothes they wore.

Although no extant sources remain to provide an exact picture of the type of clothes Carolingian women wore, historians surmise that long tunics, cloaks and in some cases, veils were used by Carolingian women.

Carolingian society was primarily a warrior society where the military leaders and fighters had eminent importance. Consequently, Carolingian military commanders dressed well while keeping a balance between practicality and reflection of status.

A Carolingian military commander usually wore a tunic and armour on top of it. Atop the armour, a cloak would occasionally be donned by the commander. A helmet and a distinct commander’s staff completed the clothing of the commander. On the legs, the commander wore half-length trousers and boots reaching half-calf length.