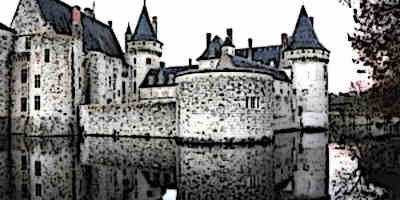 Castle Moats were added to Castles in the middle ages, to protect the castle from attack. Read more about the Castle Moat Definition >> 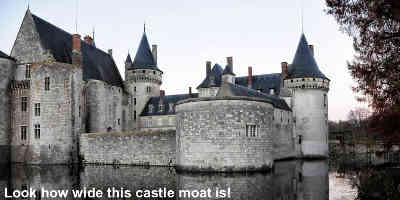 The Castle moat was probably the 'best defensive structure' for a medieval Castle Read more about the How did a Moat Protect a Castle in the Middle Ages? >> 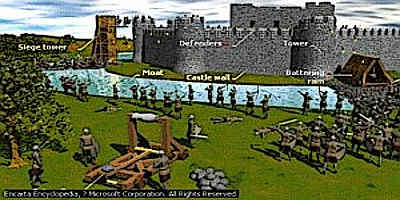 Learn how medieval soldiers and knights would overcome a castle moat Read more about the How did enemy Soldiers Overcome a Castle Moat? >> 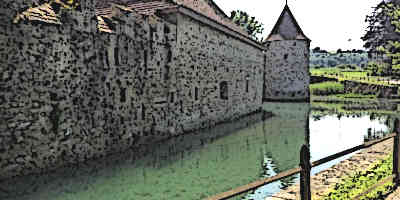 Moats were a vital part of the defense of a medieval castle and very successful. Read more about the How were Castle Moats Constructed? >> 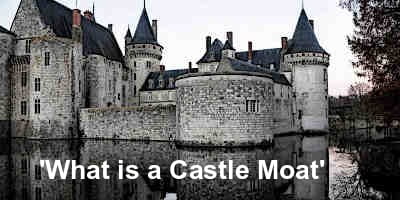 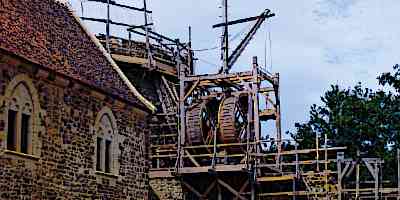 There were hundreds of stunning medieval castles built throughout Europe by renowned masons and Architects such as Gundulf, Robert de Belleme and Henry Yeverley Read more about the Who Designed Medieval Castles >>

Who worked in Medieval Castles 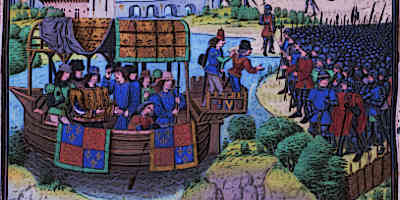 Medieval Castles could be huge and would need a large number of personnel, they needed a strong military to defend the castles for example Read more about the Who worked in Medieval Castles >>


Why does a castle have a moat?

A castle has a moat primarily to serve as a vital defensive feature. A moat makes it impossible for an enemy to dig tunnels under castle walls and effect their collapse.

A moat also serves the purpose of being a solid barrier between castle walls and a potential attacker. While in the absence of a moat, an attacking army can reach castle walls and scale it with ladders, a moat makes such an assault effectively impossible.

In the medieval period, castles typically had moats filled with water or rocks, making it very hard for an enemy outside castle walls to reach castle’s boundaries.

What is a moat used for in a castle?

A moat is used in a castle for defence purposes. A moat can either be filled by water from a nearby river or lake, or it can be filled with rocks and stones.

As a result, the moat serves as a barrier between castle walls and an enemy outside the castle walls. Without a moat, an enemy can dig tunnels underneath castle walls or use ladders and siege towers to scale the walls. With a moat, these methods are rendered futile.

Why were castles built?

Castles became a popular style of construction during the medieval period. They were primarily built to serve as a form of fortified residence for the nobility and the royalty.

The medieval period was marked by perennial warfare and unguarded construction was fraught with too many dangers for noblemen who were regularly pitted against one enemy or the other.

Castles were a convenient solution in that they allowed a nobleman to keep his residence inside well-fortified walls and also house a military garrison without the vast interior of the castle.

Another problem with pre-castle styles of building was that since building in these styles were usually made of wood, they were prone to fire and frequent destruction. Stone castles, being highly durable and impervious to fire and other similar hazards, were an effective solution to this problem.

When was the first castle built?

Following the invasion of England under William the Conqueror, Normans quickly began a widespread campaign of castle-construction. This was done to cement the Norman hold over English territories and to protect Norman soldiers from potential backlash from the local populace.

When was the first concentric castle built?

The key advantage of a concentric castle was multiple layers of defences and good defence against the best siege technologies of the time.

What is a barbican in medieval times?

Barbicans in medieval times were outposts situated at some distance from the main complex of a castle, although connected to it. The purpose of a barbican was to essentially serve as an additional form of defence at the point of entrance to a castle or any other residence.

In this capacity, the barbicans served as gateways which were heavily fortified. Most barbicans in the medieval period comprised of a main gate with two towers flanking it on each side.

The towers, in turn, were guarded by armed personnel who stood on alert for any potential enemy trying to break through the barbican and into a castle’s boundaries.

Why did William the Conqueror build castles?

In 1066, William the Conqueror launched the invasion of England. He was able to defeat the Anglo-Saxon army at the Battle of Hastings and proceeded to gain control of most of England.

However, he had to face stiff opposition from the local Anglo-Saxon and Breton populations, not only in 1066 but in subsequent years and decades as well.

He therefore built a large number of castles which were meant to show the local populations that the Norman conquest of England was permanent. The castles also housed Norman military garrisons which could launch counter-attacks whenever a rebellion occurred.

Who built the first castle?

The earliest castle in England was built by the Normans in the year 1066. It was the time when Normans, under William the Conqueror, invaded England and launched the construction of a large number of castles.

They built these castles to augment their control of English territories and to establish permanent military garrisons in the region. In Continental Europe, the earliest castles date back to the 9th centuries when noblemen in Western and Central Europe began constructing castles as a sign of their increasing might.

What sort of building is a castle?

A castle is a combination of a fortified military structure and a residence. A typical medieval castle comprised of tall walls, well-fortified with towers and housed a military garrison, all contributing to the role of the castle as a military fortification.

It also housed an internal portion where the residential quarters of the owner of the castle and his family were set up. In some cases, a castle served as a military fortification alone but this was rare. Most of the times, the castle was the fortified and well-guarded residence of the owning nobleman.

What is a stone keep castle?

A stone keep castle is a castle which makes use of a tower made entirely of stone. In early stone keep castles, such a tower was called a “keep” and was usually square or circular in shape. Stone keep castles offered a significant advantage over their predecessors, the motte-and-bailey castles.

What is the largest castle in UK?

Windsor Castle is the largest castle in UK. The original structure of the castle was built in the 11th century and over subsequent centuries, a significant number of additional buildings and structures have been added to it.

Today, Windsor castle occupies nearly 13 acres of area, employs 500 people and is the only castle that has been used by the English royalty for the past 900 years. Even today, the castle is regularly used by Queen Elizabeth II.

The castle is also notable for featuring many different styles of architecture such as Gothic, Rococo and Baroque.

How tall is a castle wall?

Castle walls in medieval period were usually 30 feet high with few notable exceptions. This height pertains to the curtain wall which was the primary feature of defence on the castle’s exterior.

The curtain walls were usually lined up with multiple towers and connected various apartments within the castle. In some cases, castle walls were much higher reaching as much as 44 feet in height.

The height of the castle walls was mostly determined by the nature of the siege technology of the period. For instance, once artillery became commonly used in Europe, the height of castle walls became mostly irrelevant and architects began to build castles with thick walls so as to withstand cannon fire.

What is a squint in a medieval castle?

A medieval castle was typically divided up into different portions. For example, the residential building of the castle included a large hall where meals were served and the sleeping quarters for the nobleman who owned the castle and his family.

Squints were small openings or peepholes which were concealed on first-floor or ground-floor chambers to allow a person to look from one portion of the castle into the other.

For instance, the castle steward on the first floor could use the small, often-slanting squint, to look down on the ground floor and see if the workers are going about their business.

What were rushes in the middle ages?

Rushes reed-like plants and pieces of different types of grass which were used to cover floors in medieval houses and castles. According to some sources, servants would simply bring in bundles of such plants and grass and strew them all over the floor.

Later, some herbs were sprinkled on top of these plants to make them smell fresh and better. However, modern scholars also believe that in the houses of the nobility, reed-like plants were woven together into mats and then spread all over the floors, giving them a tidier look.

Why were castles built by the Normans?

Normans launched the invasion of England in 1066 under William the Conqueror. The same year, they defeated Anglo-Saxon King Harold at the Battle of Hastings and effectively gained control of Britain.
However, they had to face frequent uprisings and rebellions from Anglo-Saxon noblemen in different parts of British Isles.

Consequently, the Normans proceeded to build castles all over England where they would station their military garrisons. These garrisons would put down any rebellions in different localities.

The castles also served as subduing tactic by the Normans, giving the local Anglo-Saxon populations the impression that Normans were here to stay and that resistance to their rule was futile.