Unlike castle turrets, watchtowers or look-outs were free standing structures that were built from the ground up, medieval watchtowers or look outs were built into many castle structures, they were also used for other similar fortified medieval buildings including medieval manor houses. Medieval watchtowers varied in size but were usually high structures when built as part of a medieval castle, as the name suggest the towers needed to be high so that the areas around the castle could be watched for attacking enemy soldiers. Usually a watchtower or look out would have a 360 degree view and the watchman or guard could literally see for many miles all around.

A medieval watchtower could be used to: 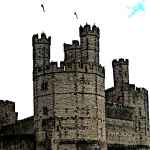 Towers of early medieval castles were usually made of wood but later watchtowers were built from stone. As the medieval period progressed medieval watchtowers became more advanced and additional parts were added to the watchtowers such as arrow slits and battlements. Watchtowers needed to be high to give the best view possible so that the castles soldiers were aware of an impending attack or siege on the castle at the earliest possible time. To get to the top of the watchtower a winding staircase that took a fair amount or energy to scale needed to be climbed, however it was worth the effort as the watchtower provided an early warning system for the inhabitants of the medieval castle.

Watch towers were used right across the world and date back to ancient times, the Romans built watch towers for their fortifications and they were an essential part of the medieval castle. The Romans used a network of watchtowers that covered vast areas to control parts of their empire, each tower could be seen from the other and the Roman’s used semaphore signalling to send messages between the watchtowers. In early medieval times the Italians built a series of coastal watch towers, these watchtowers were to warn of attacks from the Saracens and other Muslims threats. The Knights of Malta that were made famous during the crusades were excellent engineers and they also built many notable small and large watchtowers across the coast of Malta. 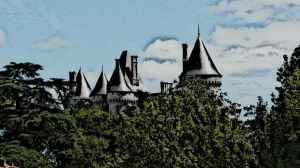 Medieval Watchtowers were popular in a French Château

Just like other castle parts and the medieval castle itself, medieval watchtowers were a victim of the advancement of medieval weapons such as canons that made the castle redundant and there was no need for a watchtower to warn of an advancing enemy.

We hope you enjoyed this medieval Watchtowers article and hope that it provided the facts and information that you were looking for, if you what a better understanding of watchtowers and castle defences in general please see our other articles such as medieval towers and Gatehouses.