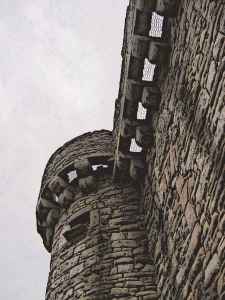 Murder Holes in a Castle machicolations

Murder holes were built around a castles main entrance and in Gatehouse passages. However there was a need to protect a castles walls and towers also and earlier designs of castle did not give a good enough defence system, this led to the introduction of Castle Machicolations that were initially made from wood. The problem was that the rocks and hot liquid thrown from the castles curtain wall usually missed attacking soldiers, especially hot liquid that would often just run down the castle walls.

The Machicolations solved this problem as they created a platform that jutted out from the castle wall and gave murder holes a better position, aim and result. Machicolations that were made from wood initially were considered so important after their introduction that they were incorporated into the actual design and became part of the castle. These incorporated stone Machicolations were stronger and could withstand an enemies attack with siege weapons better than the earlier wooden ones, they gave a much improved murder hole positions around the castles curtain wall and vastly improved the castles defences. 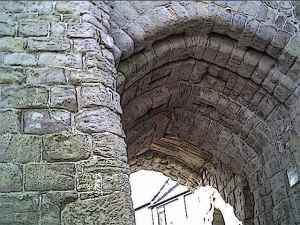 Murder holes were essential elements of a medieval gatehouse as the gatehouse was built to protect the castles entrance from enemy attack as it was traditionally the most vulnerable part of the medieval castle. Murder holes were built near the entrance and along the Gatehouses passageway, some gatehouses had very long passages and there would have been murder holes all along the gatehouse passage. The enemy could often be trapped in the gatehouse passages and this would be a the perfect time to attack them with hot liquids such as oil and tar, boiling water and stones, however more often than not archers would be lined up at the top of a castles gatehouse passage walls who would massacre the enemy under a rain of arrows.

We hope that you found this article on medieval murder holes factual and informative, please see our other articles in the castle parts section of this website. The articles on medieval Machicolations and Gatehouses will give you a better understanding and all round knowledge of Castle murder holes.