A castle turret is different from a watchtower in that it is not freestanding like a watchtower, although they are used for a similar purpose the Turret of a medieval castle would rest on one of the castles main towers, so in effect it was added to the main structure. Whereas a tower comes from the ground up a turret projects from the edge of the building, this is the main difference and because of this Turrets are usually smaller than towers as the building and not the ground has to absorb the weight of the turret. 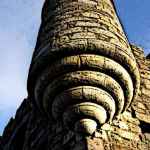 Purpose of a Castle Turret

A castle turret served several purposes, the main purpose was that the turret like a watchtower provided a 360 degree of the surrounding land, as castles were usually built high up on hills this gave the soldiers inside a fantastic view for miles and they would be able to see an enemy and others approaching the castle from miles away. The castle turret gave castle guards advanced warning of an attack on the castle. The castle turret allow the lord and military in the castle to prepare for an attack or siege. The views from the castle turret let the king and his soldiers know when it was safe to leave the castle. A medieval castle could have both turrets and towers or not.

Definition of a Castle Turret

A castle turret was a small tower that was an added structure to a castle that rested on the castles main towers vertically and gave excellent views of the land surrounding the castle.

Some castles had a combination of small turrets and larger towers, the turrets provided a good look out point from a defensive perspective. medieval castle turrets also allowed the castles archers and other military a good position to provide covering fire to castles walls that were adjacent to the castle turret during times of war. 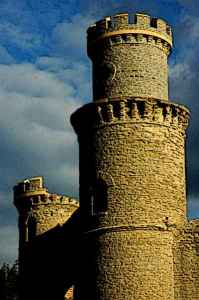 A castle turret was usually smaller than a castle tower as it was built on the castle structure and did not rise from the ground like a castle tower, there were various types of turret design, some turrets had a circular top and crenelations, others had flat or pointed roofs or other types of apex. The inside of a turret could contain a staircase depending on how high it was and it’s purpose.

Decline of the Castle Turret

As with medieval castles in general, advancements in weaponry and the invention of canons and gunpowder led to the decline of medieval castle building and turrets no longer served a military use their military, however castle turrets continued to be added as a decorative element as can be seen in the Scottish baronial Turret Style.