Pre-Romanesque art refers to the art that was produced in Europe from the early 6th century until the 11th century. During this period, different Germanic tribes firmly established themselves in different parts of Europe and created kingdoms of their own.

One overarching common feature of most of the art styles of this period is that they were influencing by Christianity which was becoming the dominant religion of Europe at the time.

The Carolingian Empire, forged by the ruling dynasty of Franks in the 8th century, was the most significant political entity of Western Europe since the end of the Western Roman Empire in the 5th century.

Under great rulers such as Charlemagne, the Carolingian Empire ushered in a brief period of cultural renaissance in Western Europe.

The second major flowering of culture and art in Western Europe since the Roman Empire took place under the Saxon Ottonian dynasty. The dynasty ruled most of the Western Europe as Holy Roman Emperors from 936 to 1056.

Like the Carolingian art, most of the Ottonian art was produced at the notable monasteries within the Empire. Major mediums of Ottonian art include metalwork, illuminated manuscripts, ivory carvings, sculptures and painting.

Most of the Ottonian art is religious in nature and was commissioned either by the imperial court or the leading Church figures of the period.

This style of art is influenced by its predecessor, the Carolingian art style, as well as elements of Byzantine art.

Ottonian art was characterised by the use of bright, flowing colours in paintings and a stress on the ideal and the spiritual in depiction. A notable feature of the style was a grand, though unrefined, style which came about with the establishment of the Empire. 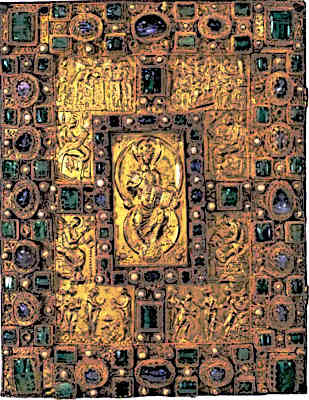 Anglo-Saxon art style flourished in England from the 9th century until the early 12th century. Although Anglo-Saxon culture produced a vast body of art preceding this period, it is usually considered a part of the hybrid Insular art style.

These changes also took place in the mediums of ivory carving and sculpting. Anglo-Saxon metalwork also flourished in the 10th century England and was in demand in all of Europe. Few pieces of Anglo-Saxon art are extant today mostly because of the 11th century Norman invasion of England.