Medieval Knights helmets were an essential part of their armoury without it a knight would not last long in battle, there were great advancements made in knight helmet design during medieval times and this was due to the improved skills of blacksmith’s and other craftsmen and the discovery of new metals and improved techniques in the manufacture of medieval helmets.

Apart from the Coppergate helmet, and the Spanghelm, the only helmet to be used by knights in the Early Middle ages was the nasal helmet. This type of helmet had a bar placed in such a way that it covered the nose and the centre of the face.

Among the number of helmets that were developed in the High period of the Middle Ages, some of them included the Bascinet, Cervelliere, early great helm, great helm, horned helmet, and the Kettle hat. All of these helmets were used by knights except for the kettle hat which was mostly used by infantry but did not have the grace of a helm that was more suited to knights. 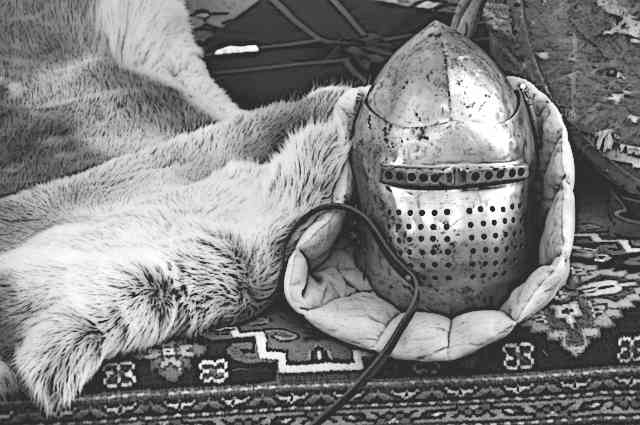 Except for the Armet, helmets made in the Late Period such as the Barbute, close helm, frog-mouth helm, Hounskull and sallet were used by knights as well as heavy infantry. A number of these helmets were improvements from the High Period where most of them were used for combat, jousting as well as religious ceremonial and ritualistic purposes.

The best way to determine helmet types during the Middle Ages was by its function. While a number of these helmets were closed like the Bascinet, early great helm and the great helm, the Cervelliere, Spangenhelm and the Kettle hat are examples of helmets that exposed the face of its wearers.

The sallet and the great helm were probably the most popular helmets of all, thanks to the protection that they offered, and which was an improvement from the Bascinet and the early helm types of helmets. These types of helmets were in use for a long period of time even until World War II where the kettle hat style continued to be in use.

Some of these helmets include:

While this type of helmet, which appeared in 15th century, was also one of the few to cover a knight’s head fully, it was different in that it was light enough and was as compact as possible to move with the wearer. It’s clear that this was a combat helmet that was designed exclusively for the knight and men-at-arms.

A Bascinet was an open-faced helmet that could protect the wearer’s head fully, thanks to a visor that was also a part of this type of helmet. This helmet was made from an iron or steel skullcap and protected the throat, neck and shoulders, thanks to the use of aventail. By the 15th century, the aventail was replaced by a plate metal forget and was thus called the ‘great bascinet’.

The sallet helmet was in widespread use by the mid 15th century and replaced the bascinet. This type of helmet did not need an aventail or a visor. While its earliest forms did not have face protection, some of its later versions, which was German by design, combined both the Italian sallet and the deep-skulled German war hat. 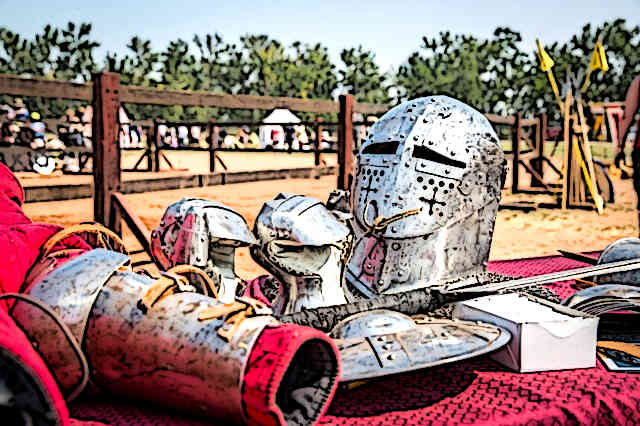 With a need for protection for the neck and head, the great helm (18 gauge) was in widespread use by the end of the 12th century. In fact, almost every knight and men-at-arms wore this helmet including the Templars as well.

This type of helmet was nothing but a great helm but with a flat top at the beginning which evolved over the course of 300 years. Known for its ability to protect its wearer from attacks from all kinds of weapons such as swords, spears and lances, it played a crucial role in being a part of a knight’s armor. That said, since it was made out of steel, it had to be worn before one went into battle.

This was another helmet that provided adequate protection during the Crusades. While this helmet evolved into different types of hems as mentioned above, it was usually worn over a bascinet especially if the fighting got long and hard as was expected during the Crusades.

Considered to be a variant of the great helm, this helmet had one important difference: a conical top. Much like its predecessor, it was used for protection for the neck and head for about roughly 300 years and also used by those who fought in the crusades.

What were Medieval Knights helmets made from

A number of metals were used to make Knights helmets including steel, iron and bronze for the reason that it served as protective headgear against weapons made of metal too. In fact, there were times when knights wore helmets that were made of rare metals such as gold and silver as well as velvet and precious stones.

How were Medieval Knights helmets made

The blacksmiths and other craftsmen were in charge of creating the Knights helmets, the same craftsmen who were responsible for a number of developments that took place in the advancement of weapons such as armor, swords and shields. One can attribute the subsequent improvements, made in helmets, to these blacksmiths too. A German Knights Helmet, with the face closed to protect the face, but also gives the option to have open.

There were a number of designs that were popular in medieval Europe. While the most basic type of helmet exposed the face of its wearer, there were others that were closed too. Among the open helmet variety, horned helmets, sallets and kettle hats were also very popular.

As for the closed variety, there were helms that were given different names because of the objects they resembled such as the frog-mouthed and the pot helm. There were also other more compact helmets such as the Armet and the Bascinet.

Knights helmets served their purpose in protecting the head of its wearer. In some cases, the shape of these helmets served to intimidate their opponents while also being considered a form of style as they were decorated with paint and lacquer.

While the open variety of medieval helmets did not protect the knights as well as the closed ones did, it was a trade-off, since ventilation was poor while the eye slits in a number of these helmets compromised vision greatly. One more disadvantage included the necessity for the use of a mechanical device to take off or put on these helmets.

The decline of Medieval Knights helmets

These Knights helmets made from metals began to decline after 1670 in military combat and especially after the use of rifles as firearms and the discontinuation of the use of bows, arrows, spears among other weapons popular in the Middle Ages.