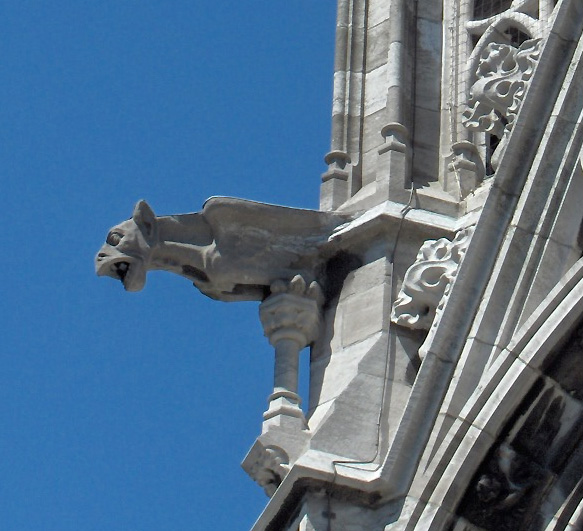 Some of the important elements of this architecture included pointed arches, tall spires, and stained-glass windows. In addition to that, medieval Gargoyles, or Gothic Gargoyles, were one of the essential elements of Gothic Architecture. Various features and figures were used as gargoyles, such as disfigured humans, mythical creatures, large birds, and other grotesque figures.

The material used for the construction of these Gargoyles included wood and stone in the main.

By definition, a gargoyle meant a carved form with a spout that was specifically designed to channel the rainwater away from the masonry walls and to save the mortar from erosion. The term Gargoyle itself originated from the French word ‘gargouille’, which can be translated as throat or gullet since the gargoyle acted as a throat or a gullet for the flowing rainwater. 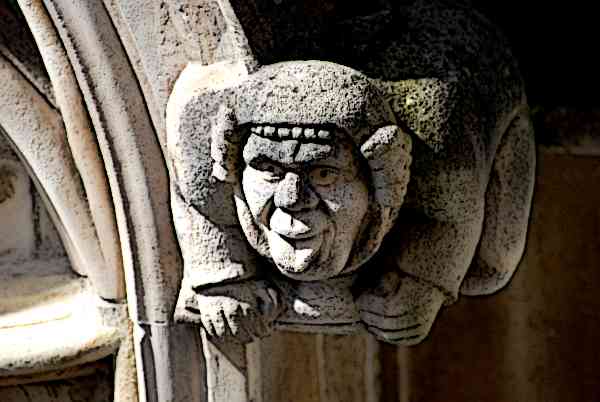 However, this was not the exclusive purpose of the medieval Gargoyles and they were sometimes also used to serve an artistic or ornamental function as well. Medieval gargoyles that did not serve the purpose of channeling the flow of rainwater were usually just called Grotesque. 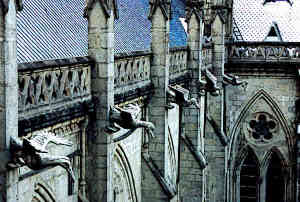 A medieval gargoyle could be located in different places along the wall in addition to being located on the edge of the roof. A medieval French legend traces the mythical origins of the gargoyles. According to the legend, St. Romanus, the bishop of Rouen, saved the inhabitants of the city from a fire-breathing dragon monster who was known as Gargouille. 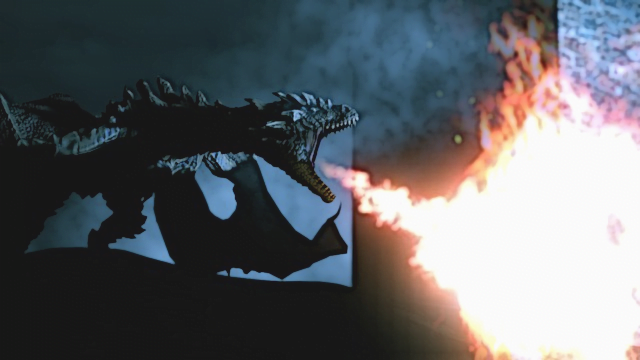 The creature was captured, brought back to Rouen, and burned. However, its head and neck did not burn because of being accustomed to the fire-breathing dragons.

Thus the head and the neck were mounted on the wall of a church in order to ward off evils. Various creatures could be used as gargoyles although perhaps the most common ones were birds with grotesque bodies and faces.

During the high medieval times in Europe, stone gargoyles were most commonly used as part of Gothic Architecture.

Medieval gargoyles were most commonly found on religious monuments, churches, and cathedrals, although their use was not confined to that. For instance, it was also common for English Gothic castles to employ the use of these grotesque shapes just to increase mystery and awe.

With the passage of time, the features and construction of these gargoyles became increasingly elaborate and intricate and thus the actual purpose of water drainage became secondary. As the medieval French legend suggested, warding off evil also remained one of the reasons.

The most important purpose of medieval gargoyles was water drainage from the roof. For this purpose, gargoyles were placed on the edges of the roofs and could be more than one. This served in quickly draining the rainwater, thus decreasing the pressure on the roof and saving it from damage.

When the gargoyles were placed along the walls, their purpose was to divert the direction of water flow and save the mortar from being damaged. Other than these real, material purposes, medieval gargoyles also served metaphysical purposes. For instance, one purpose was to ward off the evil from the buildings and another was simple aesthetic sensibilities which gained increasing importance during the late medieval times.

What do Gargoyles represent?

The main inspiration for the gargoyles, as already explained, was taken from early medieval French legend. However, with the passage of time, dragons did not remain the only figures used as gargoyles. Instead, a variety of grotesque figures could successfully serve the purpose.

A theme that was common among all gargoyles was a wide-open mouth that served as a channel for flowing water. When used for aesthetic purposes, this shape was also found on the fountains. According to another view, one of the purposes of the Catholic Church for the construction of gargoyles was to represent the Pagan converts who were generally illiterate. The gargoyle would serve as a warning to the people and a reminder of evil and destruction.

Church Gargoyles and the connection to hell

Medieval gargoyles had central importance in the construction of medieval churches and cathedrals and served as a kind of religious symbolism that was so common during medieval times.

A large church or cathedral was considered almost incomplete if it did not contain a gargoyle. Various reasons can be attributed to this importance. One, as already mentioned, was to represent the Pagan converts of the church and to remind people of death, destruction, and hell in their everyday lives.

The grotesque shape of the medieval gargoyles alongside the magnificent and beautiful church was a reminder that ugliness and evil have as much existence as beauty and piety. It also served as constant reminders of the grotesque torments of hell.

Shapes of animals were used as gargoyles even during ancient times. For instance, it was common to use lion heads as gargoyles in ancient Egypt. However, during the medieval times in Europe, the scope and purpose of the shapes were expanded and it became an art form.

During the high medieval times, in particular, gargoyles served artistic and aesthetic purposes, in addition to material and religious purposes. It became a custom to use unusual shapes, sometimes humorous in nature, as gargoyles. When constructed as fountains or on the walls and roofs of castles, their main purpose was purely artistic. Thus medieval gargoyles became an important part of medieval Gothic architecture and art.

Medieval gargoyles, as is evident, served multiple purposes. During the middle medieval times, their main significance was religious in addition to water drainage. However, with the passage of time, they began to increasingly have artistic significance.
They gave rise to a sense of mystery and awe and sometimes laughter. Other than fountains, gargoyle garden statues were increasingly used in castles and grand places for artistic purposes.

Interestingly, even during medieval times, a faction of the clergy was against the gargoyles as it considered them a distraction for the monks. But gargoyles were bound to retain their importance throughout the medieval ages and well into modern times.

Learn More About Gargoyles at Wikipedia