King Louis and the Eighth Crusade

In 1254 King Louis XI had been forced to retreat from Jerusalem as his troops were slaughtered by the Muslim Turk armies who had a fearsome reputation.

However King Louis XI was a devout Christian and it really hurt him personally to see Jerusalem in the hands of the Muslim Turks.

King Louis XI was a very determined and resolute French king and he had not given up on reclaiming the Holy lands and yet another crusade was launched by the Pope which would be the eighth crusade.

The eighth crusade started around 1270.

The Mongol army had a fearsome reputation and they were marching towards Muslim lands during the sixth crusade.

Frederik II had negotiated to protect the Muslim lands if Jerusalem was handed back to the Christians by the Muslims.

King Louis XI the famous French king realized around the time of the 8th crusade that if he could combine the Christian and Mongol forces he would have a very powerful army capable of defeating the Muslim Turk armies and could reclaim the Holy lands for the Christians.

This would be King Louis secret weapon against the Muslim Turks. 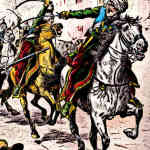 The Mameluke warriors in the Eighth Crusades

The Russian Mamluks & The Eighth Crusade

King Louis XI was however unaware that the Muslim Turks also had their own secret weapon secret warriors called the Mamluks who were a match for any warriors.

During this period in medieval history the Muslim Turks had been kidnapping Russian children who they had brought up and trained to be extremely loyal and cruel warriors who showed no mercy to anyone.

They were treated very badly by the Turks from the age they were kidnapped and were raised in a very hard way, this led to them being devastating warriors with no fear of death.

The Russian Mamluks were considered to be some of the greatest warriors in history.

The Mamluk people even killed Arab Muslim leaders if they tried to hurt or kill another Mamluk like themselves and this led to the great Mamluk leader Qutuz coming to power. 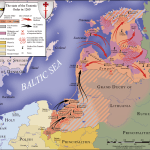 King Louis XI never got to see the Christians reclaim the holy lands and his dreams were left in tatters, the Mongol army had been heavily defeated and King Louis XI had only been able to muster 10,000 of his own troops to fight in the eighth crusade.

Even worse things were to come for King Louis XI when he unexpectedly died of a stomach problem when his ship landed on the African coast.

The Mamluk army continued their reign of destruction, killing everyone in sight who was an enemy during the eighth crusade, all the Christian Knights had been slaughtered and people in the city of Jerusalem were killed without mercy.

This finally brought an end to the eighth crusade around 1291 and the Arab forces ruled Jerusalem yet again.