Living in a medieval village

The peasants living in a medieval village had to be given permission from the knight to be able to work on any of his land and peasants called villeins had to work part-time for the Lord of the Manor. Some peasants who were called freemen got a slightly better deal as they could pay money or give food to the Lord for their land. 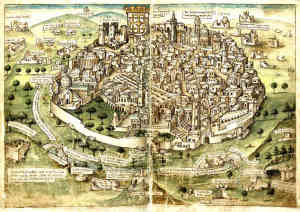 The layout of the medieval village

Usually on a hill within the village overlooking the village would be a medieval castle where the nobleman would live, near to this would be the Lord of the Manor’s Manor house. The Lord of the manor would often go hunting on the fields around his manor. Near to the town would usually be a windmill where medieval people living in the medieval village would be grinding grain that would be consumed in the village. Most medieval villages had an animal pound where stray animals were kept, there was usually a fee to release them. No self-respecting village would be complete without a medieval church and there was usually a priest’s house nearby. Most medieval villages would have a village green, a well for the drinking water, stables for horses, a stream in which to fish, a blacksmith, carpenters house, beehives and the all-important medieval inn were a medieval people could drink away all their problems with a jug of ale.

Life in a medieval village – Farming

Most villages in medieval England had a least three large fields which were planted with wheat and barley. Nothing was planted in the third field and it was left empty (fallow) the reason for this was that was always a need to have one spare field available for planting the following year. These fields were divided up into sections for different families to work on and grow their own crops. Usually a medieval family would have more than one section of the field in which to grow their crops.

Medieval peasants living in a medieval villages lived in cottages which were fairly basic, there was no glass in the windows and they usually had bare floors. In the thatched roof of a medieval peasant home would be a smoke hole that released the smoke from cooking on the stone fireplace. The building structure of a medieval peasants home was a timber frame, and the walls were made using a technique called wattle and daub which was basically covering twigs with mud and straw. Medieval people would sleep on straw mattresses and animals would live in stables or inside the house. Tools and equipment were hanging on the walls, food for winter was stored in the roof area. And clothes were kept in wooden chests. 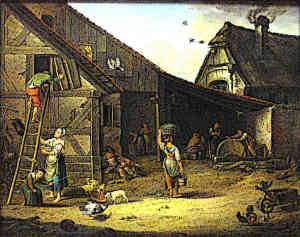 Life in a medieval village – Food

Medieval people living in a medieval village including peasants had a reasonable diet that included bread, fruit, vegetables, porridge and stew, this was usually accompanied by a drink of water and beer. In medieval times meat, fish and eggs were expensive and were classed as a luxury item. Peasant farmers who had Cows and could make cheese usually sold this at local markets due to the price that they could obtain for these luxury items.