The Medieval theatre was a source of entertainment and education for residents of the Middle Ages. Though initially tinged with religious zeal, Medieval theatre went through centuries of evolution and themes outside of the Bible were eventually accommodated. It continued to flourish for centuries and served as an inspiration for Renaissance stage plays.

Following the collapse of the Roman Empire, a small band of performers travelled from place to place to entertain audiences from all walks of life. These nomadic groups toured countries and regions to tell stories and jests, play music or perform acrobatic acts. Festivals emerged wherever they went. However, despite the fun and excitement they brought to towns and cities, religious practitioners were antagonistic towards these travelling entertainers.

The influential Catholic Church attempted to convert them and put a stop to their street performances, which were deemed sinful.
Despite the apparent hostility toward travelling performances, the Church was highly responsible for the growth of the Medieval theatre. The Medieval church offered a service that required the dramatization of Biblical stories within the church premises. It was not until the 1200s that religious dramas were held and performed outside of the church. Theatre experienced a paradigm shift over the centuries and gradually became more secular. In the 16th century, Medieval theatre ended its reign. 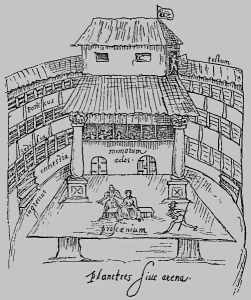 A church service called The Hours made use of music to give more impact to religious plays. Liturgical dramas covered just about every story in the Bible including Lazarus’ revival from the dead, St. Paul’s conversion and Daniel’s deliverance from the lions. A notably beloved Biblical story that was often the subject of many religious dramas was Mary’s visit to Jesus Christ’s tomb only to find him resurrected. Religious plays became more prominent outside of the church during the late Middle Ages. Medieval theatre changed bit by bit since those times. The emergence of guilds, a bustling local economy and the gradual decline of feudalism were other factors that greatly contributed to the growth of Medieval theatre.

Vernacular plays grew in popularity from around 1200 to 1350 and took over the top spot once held by liturgical plays. A number of these plays were performed on open venues during the spring and summer seasons. Also gaining fanfare were cycle plays, which were both religious and secular in nature. Though cycle plays dealt with a wide assortment of plots, it was not uncommon or unusual to base their stories on Biblical figures, sermons and church writings. Cycle plays consisted of several episodes or chapters but without regard for chronology. They could also last for as short as a few hours and as long as several days. The author of cycle plays normally preferred anonymity.

The morality play was a special type of religious play. Divided into chapters the same way as cycle plays, its theme constantly revolved around man’s endless struggle to be good and avoid evil.
In the latter centuries, secular plays emerged in schools and universities to great fanfare. They mostly comprised of Latin comedies and tragedies. In France, a secular play called the farce became widely popular. Farcical stories were usually about gods and heroes and political discussions were incorporated into these plays once in a while. Actors from noble houses were the only ones privileged enough to act in secular plays. 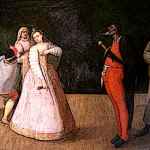 Actors on stage in a Medieval Theatre

The Medieval church became less active in theatre affairs towards the end of the 14th century. It started to loosen up its grip on play productions but still screened scripts and play contents every now and then. Towns and individuals began to take charge of arranging productions. The church, however, maintained its power to approve or disapprove a play. Dramas were mostly chanted in Latin.
Since theatre productions were considered prestigious events, they required the presence of several actors, extensive special effects and large funding. As a result, directors were appointed to handle all these troubling matters. At times, stage productions were taken care of by a committee of overseers who, among others, were tasked to ensure the stage was well-constructed, its setting designed properly and that there were enough seats for the audience. Overseers also helped actors hone their skills, assigned people to collect money at the theatre’s entrance and made the announcements before the play commenced.

Different plays had different actor requirements. The number of actors varied depending on the size of the production. Cycle plays, given the fact that they could last for several days, requires as many as a hundred or so actors (300 in some cases). Directors would hold auditions in the locality so aspiring actors could apply whenever they wished. The patriarchal nature of Medieval society did not encourage the participation of females, although in France women joined stage plays from time to time. In other countries, actors were almost always males. Actors handled several roles in a play.

The church applied the conventions of the time to stage liturgical dramas. To showcase the play’s setting, small structures called mansions were set up as backdrops at the sides of the stage. The number of mansions used for a play could increase depending on the length or complexity of the play. Mansions could be arranged in straight lines, circles or rectangles. The platea, the large space near the mansion, served as the general acting area where actors performed their character portrayals. The church provided the costumes which could be worn along with other accessories. Actors in liturgical dramas wore church clothes but this gradually changed over the course of time.

Ethelwold, Bishop of Winchester, wrote the world’s first liturgical drama, Regularis Concordia. This drama was mostly performed in monasteries since the start of the Middle Ages. Romance of the Rose by Guillaume de Lorris was one of the most esteemed morality plays in Medieval times. The play was an allegory of courtly love, famous for its fictional depiction of negative qualities and turning them into characters with voices. Castle of Perseverance, written in 1425 was another exquisite morality play which gained popularity for portraying the beginnings and endings of man and the final judgement that awaited him. 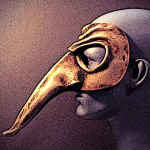 Stage actors in the Medieval times often wore masks, which came in all shapes and sizes. Most theatre masks had bizarre designs. Some were grotesque enough to scare the audience. According to historians, horrific-looking masks were meant to prevent any misbehaviour.

Medieval theatre is a study in contrast. Religious and secular themes coexisted in the same space. The church, which did not favour nomadic entertainers at first, became an influential figure in the history of Medieval theatre. Theatre dramas were a welcome diversion and kept inhabitants of that era highly entertained.