Plague Doctors costumes were designed to create a barrier between the Doctor and the outside world, the mask in particular was designed to stop airborne diseases being breathed in whilst the Doctor was out in public areas.

historians suggest that is was ‘Charles de Lorme’ who invented the Plague Doctors Costume and came up with the idea of a full head-to-toe protective costume.

The Most bizarre looking part of the Plague Doctors Costume would have been the beak shaped mask that he wore.

The beak of the mask was filled with a concoction that was designed to mask the putrid smell and also stop airborne diseases being inhaled – Typical ingredients of the mask would have been a combination or herbs, plants, spices, sponges, and dried flowers such as carnations and roses. 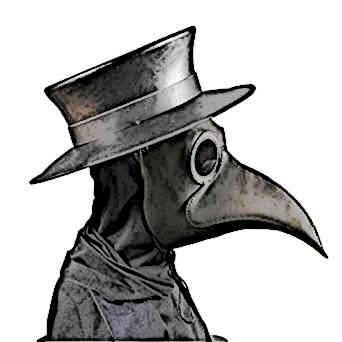 The Plague Doctor wore a full suit to protect himself from the diseases in the towns and cities which included a long leather or waxed-canvas coat or gown which covered the entire body from the ankles right up to the start of the mask.

This was accompanied by long boots, gloves,leggings and a wide brimmed hat probably made from a leather waxed material. 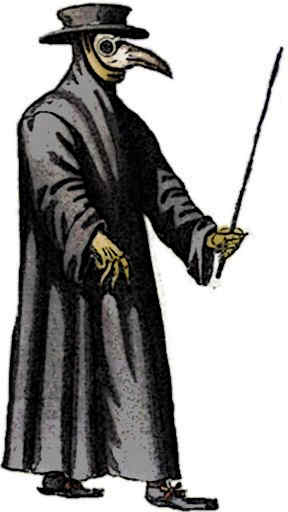 Understandably Plague doctors didn’t want to touch diseased people so they carried out inspections of the living and dead using a wooden cane as a way of pointing out problem areas to those in attendance.

The canes could also be used to keep people at a distance if they were coming to close for the Doctor’s liking.

To see a Plague Doctor probably was a terrifying sight not only because of their appearance, but as it also meant that death and illness was upon the peoples of any given town or city!