Pope Urban II was the head of the Catholic Church from 1088 to 1099. He was an avid supporter of Gregorian reforms enacted by Pope Gregory VII before him. Although these reforms themselves were quite unpopular with the European nobility and resulted in the setting up of a rival pope in Rome, Urban himself was a seasoned diplomat.

Despite facing many challenges during his papacy, he effectively reestablished the authority of the Catholic Church throughout Europe with tact and diplomacy. Among the most notable initiatives taken during his papal career was the launch of the First Crusade in a bid to free Jerusalem from the control of Seljuk Turks. 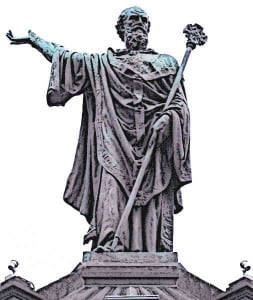 The Holy Roman Emperor, Henry IV, set up Clement III as a rival Pope in Rome after he had disagreements with Pope Gregory VII. When Urban became Pope in 1088, Clement III held the authority in Rome. Despite this, Urban decided not to enter into a direct conflict with Clement III and rather reasserted the authority of his office by visiting different parts of Europe, including areas in Italy.

As a result, although Clement III continued to be the Pope in Rome, the practical Papal authority lay with Urban II. Despite this, Clement II continued his claim to the title of Pope all the way until 1097. However, by this time, Urban had helped launch the First Crusade and was immensely popular. So a French army took Rome, removed Clement III and had Urban II installed as the Pope in Rome as well.

Among the most notable feats of his Papal career was Urban II’s attempts to organise a crusading campaign against the Muslim control of Jerusalem. He famously began public attempts for this when he gave a speech to a large gathering of European nobility in 1095, asking to launch a concerted effort to liberate the Holy Land.

According to different historical sources, Urban II devised the idea for this campaign in a bid to end many internal conflicts between kingdoms of Europe. According to his own letters, Urban II also promised remission of all sins to the participants of the Crusade. Urban died in 1099 before news of the Crusaders’ victory over Jerusalem reached him.

Pope Gregory VII’s reforms had been rather unpopular with the European nobility. Urban II was an ardent and firm supporter of these reforms but at the same time, he maintained a close and cordial relation with different European monarchs. He directly supported the Italian Prince Conrad’s bid for the throne, crowning him King when Conrad succeeded in his attempts.

He forged close ties with the Sicilian rulers, effectively granting wide ecclesiastical powers to Sicilian ruler, Roger I. In return, the authority of the Church was established in Sicily quite firmly. Through his fine diplomacy, Urban II was also able to rally the support of both the French and the English. Finally, when he launched the First Crusade, he became immensely popular throughout the Christendom.