Medieval Dance and music during the medieval period can be traced back to the early parts of the medieval era and some even date back to the times the Anglo Saxon glee-men. Medieval dances were categorised into two primary sections, the first one was the court dance and the second the country dance.

During the Middle Ages, dancing was a very reserved practice and the church played a crucial role in the development of medieval dances. The church primarily did not approve of medieval dancing. However, it eventually became accepted and became part of some religious sermons or ceremonies.

Medieval dances showcased a variety of rich cultures from different parts of Europe. There were several types of dances that were popularised during the medieval period such as Carol, Basse Dance, The Egg Dance, Scottish Dance, among many others. Instruments such as drums and lutes were also used while dancing. They were used as accompaniment to the songs sung during these performances. 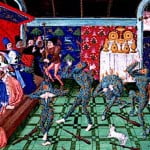 Various kinds of laces were used, sewn and entwined carefully over these medieval dance costumes. Underneath medieval dance costumes, women wore corsets and heavily structured petticoats to form perfectly rounded shapes towards the bottom of the gown. Headdresses were also very popular among women from the upper-class society as they played a major part of the medieval formal attire and were worn during social occasions and medieval dances.

Medieval Men, on the other hand, wore bold coloured tunics that were mostly decorated with emblems signifying their wealth and influence. Some medieval men would carry swords, fitted at the right hand side of their belts. These expensive looking outfits usually came with leather shoes and fur hats to accessorise them.

Meanwhile, peasants wore their daily clothing to medieval dances. Most peasants during the medieval times only had one set of clothing but if they owned more than one, they most likely wore the more fashionably acceptable ones during these occasions. Females commonly wore plain cut coloured dresses while males wore dull coloured woollen jackets and shirts.

There are several types of medieval dances. The most common types were the Circle Dances, Court Dances and Country Dances.

Court Dances were dignified dance performances done at a court. As recorded in historical documents, these dances included tiptoeing and jumping steps, as well as several curtseys. The most common court dances were the Basse Dance, Black Alman, Black Nag, Rufty Tufty.

Line Dance was another type of medieval dance. Line dances were choreographed dances with repeated steps. Similar to the circle dance where the dancers formed a circle, a line dance was performed in one line or several rows. Common lines dances were La Spagna, The Morris Dance and The Jig.

Country Dance were considered folk dances and were identified by a combination of circle and line dancing. It also involved a lot of clapping and spinning steps. The most popular country dances during the medieval period were The Egg Dance, Quadrille, Pavan, Farandole and Burgundian dance. 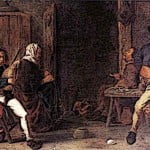 About 90 percent of families who lived in villages were either peasants, farmers or village labourers. Most of these people did not own several sets of clothing unlike the nobles and royalty. Nevertheless, peasants still spent their holidays in church festivals, some engaging in medieval dances and social gatherings. However, they only mingled strictly within the same social class. Peasants had never joined or been seen around the wealthy people’s social gatherings, especially when there was royalty involved.

Medieval Dances for Royals and Nobility

Kings and Queens usually sent invitations to noblemen to attend Royal Balls, where lavish banquets were held followed by music and medieval dancing. Young nobles and royalties greeted each other in the form of courtesy. They would dance slowly in circle. Sometimes, people from the noble classes would arrange some of these social events. They provided funding for them and spent a great deal of money ensuring that the events were successful attended and enjoyed by people who belonged to the same class. These preparations involved performances of travelling minstrels as well as medieval dancing to the celebration.

Carol dancing was probably the most documented medieval dance during this era, popularised during the 12th and 13th century in the western part of Europe. This was also one of the most basic examples of a circle dance.

Estampie was another circle dance that replaced the Carol. It introduced a couple line dancing while facing the public and instead of singing, instruments were used as accompaniment to the dance.

Egg Dance was a country dance that was named after an Easter game. The dancers moved between the eggs but avoid damaging them. This kind of dance was also very commonly performed during festivals and large celebrations.

The Morris Dance was one of the most significant medieval dances. It was the oldest and it has remained the same since it was introduced with King Edward III. The medieval dance told stories of bravery and gallantry such as those of Robin Hood and his men. 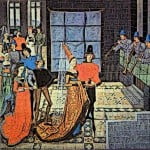 The basse danse, or “low dance”, was a popular court dance in the 15th and early 16th centuries, especially at the Burgundian court

Other popular moves in medieval dances were the Bransle steps where the dancer steps in the specific direction and brings the other foot together, and the Slip step where the performer does a side-way skipping step. There are still several other steps depending on the type of medieval dance. Another thing the medieval dances had in common were the bows and curtseys.

Medieval dance music varied with the different kinds of dances. The earlier medieval dances had musical instruments and singing as music to the dances. Later on, some only used music instrumental variations with the use of jingles, bells, long and side drums, kettle drums, tabors and tambourines. While others only had singing as music to the dances.

There were various dances during the medieval period. Unfortunately, very little evidence were recorded except those that were captured in paintings and other literary works that survived over time. Some of the medieval dance names such as Carole, Estampie and Saltarello had been known since the middle ages and were handed from generation to generation. 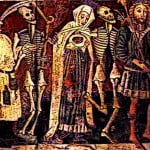 The Medieval Dance of Death was a painting that showed death in a long chain-dance. It was 30-meter width life-size painting that depicted 24 human beings from different social classes. They were dancing around in procession and were calling people to dance. However, the painting also depicted that those who were invited to dance declined to dance.

The painting was famous for several centuries and some illustrated books were said to have been produced based loosely on this painting. It was destroyed during World War II and only a copy of the original medieval Dance of Death painting was kept.

Dancing has been a part of human history, even to the earliest days of civilization. It has become an integral part of human expression all over the world for various purposes and reasons, be it for worship, celebrations, entertainment or cultural functions. During the medieval period, these medieval dances became part of religious practice and became very common among Christians especially during the 13th century. Social events and gatherings, whether secular or religious were often enlivened by dancing. However, the physical manifestation of happiness, bliss and glee were not only revealed during these occasions but has transcended to become part of every life, medieval or otherwise.