When Galahad reached his adulthood, he was brought to King Arthur’s court and made a Knight of the Round Table. When Lancelot and others set out to seek the Holy Grail, Galahad also set out on a similar quest and was ultimately among the three to reach the Holy Grail.

According to Arthurian legends, Sir Lancelot was in love with King Arthur’s queen, Queen Guinevere. So when he went to King Pelles, his daughter Elaine magically made herself appear as Guinevere. Lancelot believed her to be the true Queen and lay with her. Later, Lancelot learned of the truth and wanted to kill Elaine but discovered that she was pregnant with a child. This child was born and grew up to be Sir Galahad.

When Galahad reached adulthood, he went back under the care of Sir Lancelot. Lancelot led Galahad to the court of King Arthur. At the King’s famed Round Table, a seat called Siege Perilous was reserved specifically for the person who would be successful in the search for the Holy Grail.

Until the arrival of Galahad, every knight who had sat in the chair had met his end tragically almost instantly, and so the seat was meant only for one who would be truly successful in the quest. When Galahad reached the court, an old knight led him to the seat and made him sit on it. The seat did him no harm, so King Arthur realized that he finally beheld the knight who would find the Holy Grail.

Another legend regarding King Arthur’s knights relates that King Arthur took Sir Galahad to the river where a sword stood in the water. And on the sword was inscribed that only the greatest knight could take it. King Arthur asked Galahad to try to reach and take the sword, which Galahad did successfully.

Upon the success of this test, King Arthur proclaimed Galahad to be the greatest knight in the world. He immediately became one of the most famous Knights of the Round Table, destined to accomplish great feats in the service of the King.

The Search for Holy Grail

As soon as Sir Galahad became a part of King Arthur’s body of knights, the court of the King was given signs from heavens that the quest for the Holy Grail should begin. As a result, all the Knights of the Round Table began journeys to seek out the Grail. Sir Galahad initially set out alone, meeting many adventures along the way and rescuing many people. Later he met Sir Bors and Sir Percival on his way.

Sir Galahad found the broken Sword of David on the ship. Later, he and Sir Percival reached King Pelles. It was at the court of King Pelles that Galahad produced the Sword of David and then mended it as well. He and Percival were then led to the location of the Holy Grail and Galahad stepped into the room containing the Grail. He was the knight who finally saw and beheld the Grail, according to Arthurian legends.

When Sir Galahad beheld the Grail, he asked Joseph of Arimathea to grant him the wish of choosing his time of death. Galahad was granted this wish. When he was later on his way to King Arthur’s court, Galahad witnessed a number of divine experiences. These led him to witness a holy rapture so that he immediately wished to be dead. Upon his wishing this, angels descended from heaven and took him up to the skies. Legends state that Sir Bors and Sir Percival accompanied Sir Galahad at this time and witnessed his ascension. 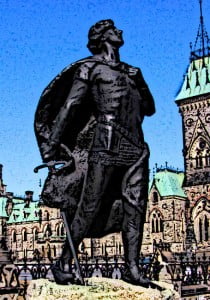 Among the famous knights of Round Table, Sir Galahad reached an exceptional esteem and honour.

Among the famous knights of Round Table, Sir Galahad reached an exceptional esteem and honor. The stories related to Galahad find many parallels in stories associated with King Arthur. For example, before achieving his greatness, King Arthur drew his legendary sword from a stone, a sword which no else could draw.

Galahad similarly passed King Arthur’s test when he successfully drew out a sword from a stone in the river, thereby passing a test similar to that passed by King Arthur in his youth.

One of the key characteristics which differentiated Sir Galahad and famous knights who were his contemporaries was that Galahad was reputed to be of an exceptionally pious and chaste nature. According to historical researchers, the model for such a knight can be found in the Cistercian Order which coined the notion of a warrior who was also a religious ascetic.

Both of these traits are sufficiently provided in the character of Sir Galahad. It is significant to note that similar ideals informed the creation of the Knights Templar Order.

Sir Galahad was one of the most prominent Knights of the Round Table. He was the illegitimate son of Sir Lancelot and Elaine who spent his early life in a nunnery. As per Arthurian legends, he was considered the bravest warrior in the world by King Arthur and was divinely selected and sanctioned on the search for the Holy Grail.

He also passed a test similar to King Arthur’s by drawing out a sword from a stone. According to the legends, Galahad sought out and found Holy Grail and soon after, ascended to the heavens on his own wish.