What is Feudalism? – Definition of Feudalism

Feudalism as it is widely understood in modern times refers to the social and legal systems of the Western European Middle Ages that appeared and developed during the 8th and 9th Centuries and lasted into the 15th century.

The classic definition which was penned by François-Louis Ganshof a very knowledgeable Belgian medievalist who studied the subject at the Athénée Royal was that ‘feudalism describes a set of reciprocal legal and military obligations among the warrior nobility revolving around the three key concepts of lords, vassals and fiefs’.

Under this legal and social system vassals were usually given land by a Lord on the condition that the Vassal would pledge allegiance to the Lord when needed. This is why Medieval Knights and the such were granted land so that a Lord could quickly raise an army as and when required. 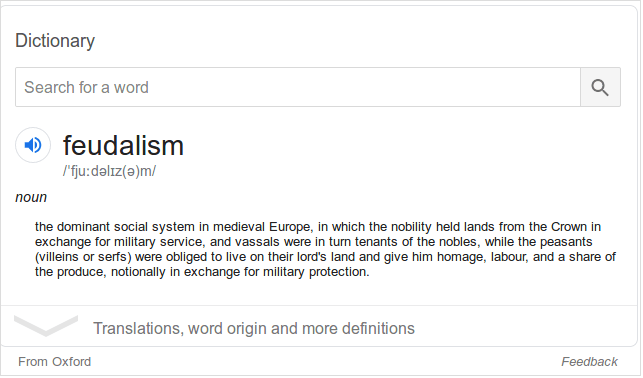 An estate of land, especially one held on condition of feudal service; a fee.

In a Broader sense the idea of Feudalism was centered around the relationship of someone providing land in return for labor or service, but this was commonly with a connection to ‘Military Services’ in the middle ages.

Feudalism (Fief) comes from the Latin word Fuodum or Feudum.

Includes not only the obligations of the warrior nobility but also those of all three estates of the realm: the nobility, the clergy, and the peasantry bound by manorialis – this is sometimes referred to as a “feudal society”.

Two excellent books on the subject of Feudalism, they also question as to whether Feudalism is a useful concept in understanding medieval society.