The Holy Roman Empire was a loose Empire of multiple political entities that co-existed under an elaborate governance system and an increasingly ceremonial Emperor from the 10th century until the 19th century.

Most of the territories of the Empire were situated in central Europe and given the sheer diversity of these territories, it is hard to pin an exact kind of culture or clothing style which identified the Empire through the centuries of its existence.

The ground reality was that disparate cultures such as the German culture, the culture of Swiss cities and other entities evolved independent of each other while remaining a part of the Empire. Here are some glimpses of the clothing trends in different parts of the Empire. 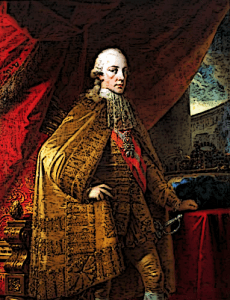 German women of the period dressed rather conservatively in style but the few layers they used were well embellished. The chemise was the basic linen garment that women wore against their body. This piece of clothing was usually white in colour.

In some cases, the chemise included decorative embroidery on the neckline. The overgown was the main part of the garment and was worn together with a skirt. The overgown was in a bodice-style while the skirt was pleated in. Lacing at the front, back or on the sides of this overgown made it possible for a woman to get in and out of this dress quickly.

A vast variety of headgear was also in use of German women of the period. Long caps, wide caps shaped like pizza and many other types of hats were used as a regular part of dressing. Additional accessories used in dressing included belts, jewelry, pouches, gloves and shoes.

Like the Empire itself, the Holy Roman Emperor was typically an heir to multiple cultures, influences and styles. This was reflected in the wardrobe of the Emperor Rudolf II who kept the title during the last half of the 16th century and early 17th century.

The most notable influence on Emperor Rudolf’s clothing was that of the Spanish Empire where he stayed at the royal court for many years during his youth. During his youth, for instance, the Emperor was reported as wearing a doublet, bell-shaped trousers together with a codpiece and a high-stiffened collar, all reflecting a Spanish style of clothing.

As an Emperor, Rudolf regularly wore velvet doublets with gold buttons and other decoration such as feathers in the hat. He further regularly ordered the detailed inventory of the Spanish Emperor’s clothing and had clothes made in similar style at his court, first in Vienna and then in Prague.

During its existence from the 10th century until the 19th century, the Holy Roman Empire underwent major changes and accepted notable influences. In clothing, the early Empire was closer to the Carolingian and Frankish style of dressing which embellished Roman heritage with Germanic practicality and Catholic themes in style.

Over subsequent centuries, the Byzantine Empire exerted significant influence over the clothing trends in the Empire. The Spanish Empire also exerted a very strong influence on the clothing used by royalty and nobility in the Holy Roman Empire, primarily due to the close dynastic relationships between the two Empires.