The high medieval period was marked by rapid integration of various cultural influences and styles into Europe. Europe was exposed to the contemporary Arab culture during the Crusades and travellers from Europe brought back news of the diverse cultures in distant regions.

One of the direct cultural borrowings of this period was the spinning wheel which furnished Europe with the technology to spin greater amount of textile in lesser time. This coincided with a period when more and more people could afford well-made clothes and consumption of well-manufactured textiles grew rapidly.

A notable development during the period was the use of elaborate sleeves of the under-tunic. In some cases, the sleeves were so wide that the hems touched the floor. Linen was used to manufacture the under-tunic and over it, a pelisson was worn. Finally, a loose blouse was usually worn on top of pelisson. 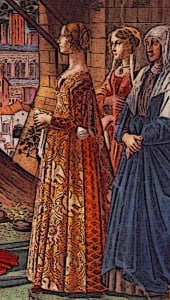 Medieval Fashion in the 14th Century

Dressing for men also became significantly elaborate by the high medieval period. During this era, men would wear linen breeches and shirts as part of their undergarments. Woollen hoses were used to cover the legs, often culminating in a leather sole which effectively functioned as an attached shoe.

On top of the shirt, a doublet was typically worn which was made in the style of a buttoned jacket. A woollen tunic was then worn on top of the doublet and served as the actual dress. An unusual fashion in European noblemen began in the middle of the 14th century when they took to wearing body-tight doublets with no tunic on top.

An armour-coat or jupon, originally a part of battlefield dressing, also became a regular part of European men’s dressing. It was also during this period that headgear became a popular part of men’s dressing. The most notable form of headgear of the high medieval era was the chaperon which evolved from a hood and now became an elaborate kind of hat with a face-opening.

Although the clothing of the commoners in the high medieval period remained fairly simple, it underwent significant changes when compared to the early medieval period. Men began to wear knee-length tunics, shirts and braies together with thick shoes while women used kerchiefs and aproned-gowns as part of their working dress.

Buttons had been used before the high medieval period in European dressing but they mostly served to adorn the dresses. In the high medieval period, buttons became a practical part of dresses, serving a role similar to their present use. Kerchiefs also became a part of clothing during this period, purportedly being invented by Richard II of England in the late 14th century.