Early medieval clothing reflected the different social and cultural currents that Europe was facing at the time. This was a time when Roman Empire had fallen and Western Europe was being reinvigorated under wave after wave of different Germanic tribes.

It was ultimately the interactive dynamics of the Roman heritage with the culture of these tribes which defined the culture of the period, including the clothing prevalent at the time. Like most other aspects of culture in early medieval period, clothing style and trends varied across different regions of Europe, also all shared some general features. It is important to note here that the dresses of the elite and those of the common men differed significantly during the early medieval period.

The rich and the nobility in early medieval Europe usually wore expensive and luxurious clothes, often importing them from other parts of Europe or from outside the Continent. Silk was commonly used in the elite clothing and was usually imported from the Byzantine Empire.

Cotton was similarly a regular ingredient of the clothing of the rich and was usually imported from Egypt and Arab lands to the East. The rich also used wool and linen in their clothing as well as leather and fur which came from hunted animals. A vast range of decorative features such as buckles, brooches, shoulder clasps and belts were used in elite clothing, especially in Anglo-Saxon England. 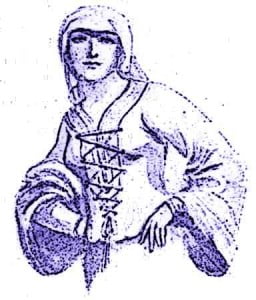 The Tunic was the most common garment worn by men in early medieval period. The basic form of a tunic comprised of folded portions of linen with a neck-hole. The length of the tunic usually defined the vocation or social status of a man.

Warriors and peasants wore a tunic of knee-length or even shorter so that it wouldn’t obstruct them in their daily work. Richer nobility wore longer tunics with the richest sometimes wearing extravagantly adorned and embellished tunics which fell all the way to the feet and utilised colourful silks.

Sleeves were attached to the tunic as a covering for the arms. For the lower body, basic leggings together with laces were used. When venturing outdoors, the rich would complement this basic dress with an additional cloak or mantle.

Women during the early medieval period usually wore a simple tunic dress with sleeves. The tunic worn by women usually carried a slit at the bodice where the slit was then kept together with lacing. Underneath this dress, a hose of varying lengths was worn in different parts of Europe.

Women also possibly wore an additional under-tunic in conjunction with the tunic dress. Like men, they further used a clock or mantle when venturing out. Given the significant influence of Christianity on the culture of the period, it is not surprising to note that women also wore some sort of cape or kerchief to cover their head in public.

During the early medieval period, the dress of Christian clergy in Europe moved from simplistic to that of increased sophistication. It was during this period that ecclesiastical authorities began to use a wide variety of dresses, each strictly prescribed for a Church official of a certain status and position. Among the types of dressed used by the clergy during this period were the cope, pallium, sole, maniple and dalmatic. Silks were also used extensively in the dresses of superior clergymen.