The Rowton castle dates back to the 17th century and covers a large area in Shropshire.

It is located near present-day Shrewsbury.

In the place of the modern-day structure, another castle of the same name had stood for hundreds of years.

Historical records reveal evidence of the castles existence in 1292.

This older castle was demolished in 2482.

It was in the 17th century that the extant modern structure was erected which remained in the possession of the Lyster family until the end of the 19th century.

During this period, the original structure was significantly expanded, remodeled along more contemporary lines and renovated in the 18th and 19th centuries.

The castle became the site for Royal Normal College for Blind in the 20th century before becoming the venue of a luxury hotel. 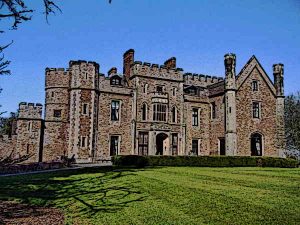 A medieval castle stood at the site of the modern-day Rowton castle.

This medieval castle also bore the same name and although its exact date of construction is unknown, what is historically known is that the castle was razed to the ground in 1482.

There is scant historical evidence that this older castle was made from earthwork although there has been evidence of timber construction prior to the modern castle.

Sometime around 1700, another castle over the ruins of the older castle was built for Richard Lyster.

The house remained in the Lyster family until the end of the 19th century.

In 1889, the final descendant of the direct Lyster lineage died without an heir, passing the castle to her nephew.

In 1941, the castle was turned into the Royal Normal College for the Blind and in 1989, it was renovated and opened as a luxury hotel.

The Rowton Castle is located in Shropshire, England.

It is approximately at a distance of 6 miles from Shrewsbury.

Being located right in the middle of the Shropshire countryside, the castle is flanked by extensive gardens on all sides.

Some historical sources reveal that an earthwork castle was erected at the site of the castle sometime in early medieval ages.

This early structure was either a fortification or a small manor house.

In 1482, this early structure was demolished. In the 17th century, Richard Lyster had a castle constructed over the ruins of the old one.

This castle was passed on to the ownership of Montagu Lowry Corry in 1889.

It was sold to the Royal Normal College for the Blind in 1941.

In 1953, a major portion of the castle structure was ravaged in a fire.

Modern renovations of the castle began in 1986 and in 1989, it was converted into a luxury hotel.

What Type of Castle is Rowton?

It was never used in any military activity and as such doesn’t support many non-residential features.

It was used as a college in late 20th century and is currently a luxury hotel plus a popular venue for wedding events.

One of the most interesting features of the castle’s architecture is a huge tower.

The modern-day castle was originally constructed in the 17th century.

It was originally constructed in a red-brick outlook. However, a major portion of the present structure of the castle was constructed in the 19th century by notable architect George Wyatt.

It was by him that the Upper and Lower Lodges of the castle were constructed.

The Lodges were connected to the house with avenues.

It was also in early 19th century that a porch and service buildings were added to the castle structure.

Since its location is in the thick of the Shropshire countryside, it has always been accompanied by vast gardens.

According to some historical sources, the medieval version of the Rowton castle had gardens dating back to 1292.

Modern parks and gardens of the castle were renovated in the 19th century.

Today, the castle has gardens spanning over an area of 17 acres.

The castle lacks any notable defensive features since it wasn’t constructed as a fortification.

Rather, the castle was constructed purely for residential purposes and this is reflected in the structure of the castle.

It had a large circular tower located at the south-west but the tower was meant to give the castle a more antiquated look rather than to be used for defense.

Since the castle was never sieged and wasn’t home to any notable personalities over the course of its history, its lack of defensive features didn’t affect its security.

Rowton Castle is Famous For?

The modern-day Rowton Castle is notable for its beautiful gardens that spread over 17 acres.

The castle was hit during the Blitz, sustaining significant damage.

It was among the few castles which sustained notable damage during the Second World War.

The castle is famous as a regular wedding venue since the final decade of the 20th century.

The original Rowton castle was constructed sometime in the early middle ages.

It had an earthwork construction and still stood in the 15th century when it was destroyed in an attack.

The ruins of this medieval castle stood at the site until a new castle was constructed on top of them in the 17th century.

The modern-day Rowton castle is a modified version of this 17th century structure.

The castle was built using bricks and was meant for residential purposes, lacking any defensive features.

It was significantly renovated in the 19th century by George Wyatt and a new porch and lodges were added to it.

It later became the Royal Normal College for Blind in 1941.

Later, the castle was turned into a luxury hotel and it remains in that role to this day.

The castle is surrounded by gardens spanning over an area of 17 acres.