The Lumley castle is located in the North of England.

It was originally the site of a manor house of the Lumley family.

In 1389, Sir Ralph Lumley converted the manor house into a castle with the permission of the Bishop of Durham.

The castle’s original structure was primarily meant for residential purposes and did no’t include any military fortifications.

This remained true for its existence throughout the late Middle Ages and the later period.

It was never used for any military purposes.

The castle remains in the ownership of Lord Scarbrough although it has been turned into a hotel under the No Ordinary Hotels chain. 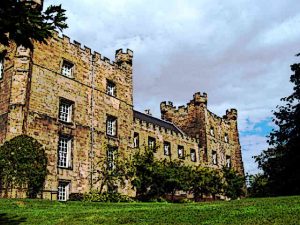 The site of the castle was originally a manor houses owned by Sir Ralph Lumley. He had a castle built in its place in 1389.

The original structure underwent significant modifications in the reign of the 1st Baron Lumley.

These included changes to the windows to make them more transparent, the installation of a huge fireplace in the great hall of the castle and which contained the family’s coat of arms.

Later a library was added to the castle and it came into the hands of the Bishop of Durham in the 19th century.

In the same century, it was turned into Durham University’s hall of residence before becoming a hotel in the 1970s.

The Lumley castle is located in the city of Durham in the North of England. It is situated in the Chester-le-Street of the city.

The original castle was built in 1389.

It passed to the hands of the Early of Somerset before returning to the Lumley family in 1421.

James IV and I traveled to the castle before his coronation ceremony in London.

In the 17th century, the structure of the castle was modified by 1st Baron Lumley.

It is believed that Sir John Vanbrugh had further modifications made to the structure of the castle in the early 18th century, including the construction of a library.

In the 19th century, the castle became a residential hall for the students of University of Durham.

What Type of Castle is Lumley?

The Lumley castle was primarily constructed with an eye to residential needs, so the castle is not exactly a military fortification.

It does not have the towers or moats which are typical of castles built for more defensive purposes.

The original site of the Lumley castle had a manor house built here.

Sir Ralph Lumley, who fought the Scots, returned to his manor house in 1389 and requested the Bishop of Durham to have the manor turned into a castle.

After gaining this permission, the original structure of the castle was erected.

Much of this original structure remains extant to this day.

Most of it comprised of residential quarters meant for the Lumley family.

In the reign of the John Lumley, more construction was done and the castle was expanded by the inclusion of many new structures. 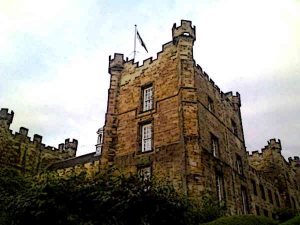 The modern-day Lumley castle, after having been turned into a hotel, includes 73 rooms, most of which are regally sized.

These include the King James Suite where James VI briefly stayed while on his way to London for his coronation in 1603.

The castle’s is not very big compared to other medieval era castles.

This may be on account of the fact that it lacks most of the notable fortification features such as external boundaries walls of towers.

Quite understandably, the castle was never the site of any major military activity.

The Lumley castle was not built for defensive purposes.

So it does not have any notable defensive structures such as a boundary wall or any external curtain walls or towers. Rather, it comprises directly of the residential buildings, although the residential structure has some parapets constructed atop.

The lack of any notable defenses makes sense since Sir Ralph Lumley originally constructed the castle purely for residential purposes and this role did not change over the course of later centuries.

One possible reason for this could be the fact that being located in such a region of the North which didn’’t see a lot of military activity, no need was felt to prop up any fortifications for the castle.

Conversely, it’s possible that the Crown didn’’t authorize the construction of defensive structures at the site.

Lumley Castle is Famous For?

Lumley castle is famous for its quadrangular structure which gives it a neat and solid outlook.

The durability of the castle is also one of its notable features which has enabled it to exist since the 14th century without any major damage to the original structure.

The castle famously became the residential hall for University College Durham students before it was converted into a hotel.

As a hotel, the castle is famous for regal banquets.

Lumley castle was originally constructed in 1389.

The structure of the castle was such that it was meant to be a residential castle with little or no military fortifications to guard it against any external enemies.

The castle was taken away from the Lumley family briefly in the early 15th century before reverting to them in 1421.

It underwent some renovations under 1st Baron Lumley in the 16th century.

King James IV and I also stayed briefly in the castle in 1603.

In the 19th century, the castle was the residential hall of the University of Durham.

It was later sold by the university and turned into a hotel in 1976.

Today, the castle is a part of the No Ordinary Hotels chain and includes 73 rooms, including a room named after King James in remembrance of his brief 1603 visit.