Fresco paintings refer to a technique in which an artist paints a mural on lime plaster. Since such a painting is typically done on lime plaster when it is still fresh, the painting become a part of the plaster upon drying.

Fresco paintings was one of the most popular form of art in the late medieval Europe. Especially when it came to religious art, frescoes were frequently used to adorn the walls of ecclesiastical buildings such as churches and chapels.

Although this medium of art was practiced in classical antiquity as well, having examples in classic Roman and Greek art, it was only in the Renaissance period that fresco painting reached its apogee.

Fresco Paintings in the Byzantine Empire

Frescoes were one of the most popular form of art in the Byzantine Empire. They were most commonly employed to adorn the interiors church domes, walls and vaults. Consequently, the key themes painted in most of the Byzantine frescoes was Biblical or Christian in nature.

The Byzantine style of fresco painting evolved significantly over the course of the Empire’s existence from the 5th to 15th centuries.

Early Byzantine frescoes used static elements while frescoes dating to 13th and 14th centuries depict a style in which more dynamic elements such as elaborate perspectives of space were used.

Although fresco paintings remained a popular medium of art during the High and Late Middle Ages, it was Italian Renaissance which took the art form to its heights.

During the 15th century, Italian artists extensively adorned the interior of churches and other buildings with elaborate fresco paintings, embellishing it with new techniques, elements and stylistic features.

Towards the end of the Renaissance period, oil paint became increasingly popular among artists since it allowed greater manipulation of light. Consequently, Italian fresco paintings underwent a decline. 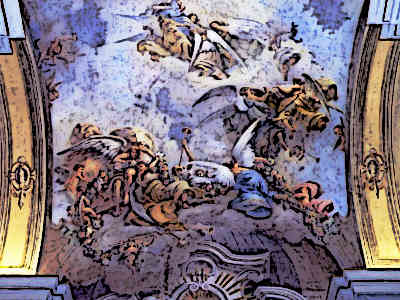 Fresco remained a popular art form during the late medieval and the Renaissance periods. One of the pre-eminent reasons for its popularity was the freedom it offered to an artists.

The technique of painting a fresco typically involved dampening the wall first and then applying a layer of damp plaster to it. On the wet plaster, a basic design of the fresco to be drawn was made.

Compared to dry paintings which could flake off of walls over time, fresco paintings were far more durable. This is manifest in many fully-preserved frescoes dating back to the Renaissance period.