Vikings were formidable warriors who began ranging out of Scandinavia and into northern Europe from 9th century onwards. They eventually mustered a conquest of England and through their Norman descendants, left a permanent mark on the socio-political outlook of Western Europe.

Military culture dominated Viking society and this was reflected in the wide range of laws and regulations which overlooked Viking social life. These laws extended to the construction and maintenance of shields as well which Vikings considered a vital part of their battlefield gear. The most common type of shield used by the Vikings was the round shield.

Viking round shields were usually 30 to 36 inches in diameter although the specific size of a shield varied according to the warrior wielding it. Shields as large as 48 inches in diameter were also used. The most common material used in the construction of the round shield was linden wood. Other types of wood were also commonly used such as poplar, fir and alder wood.

Multiple planks of wood were glued together and cut into a circular shape for the basic structure of a round shield. The rim of the shield was then fitted with additional bindings such as those of iron to reinforce the structure. Leather and different kinds of fibrous materials was used on the front of the shield to make the shield more durable and prevent enemy blades from cutting too deep.

A sizable iron boss was used at the centre of the shield to protect the hand holding the shield by creating a hollow at the back. The boss may also have been used to deflect an opponent’s weapon. 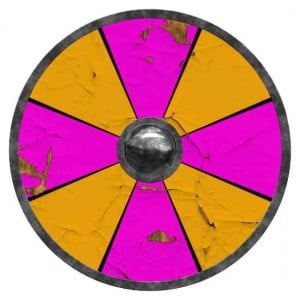 Much like the Anglo-Saxons, the Vikings made frequent used of a shield wall as a battlefield tactic. In such a formation, the Viking warriors would line on the battlefield and stand close to each other so that their shields would overlap and create a tight shield wall.

The warriors would then use the shield wall as a defence and throw smaller spears towards enemy lines. At close quarters, Vikings used large spears to thrust from above the shield wall while securing themselves behind the wall.

A number of laws in the Viking society specifically applied to the construction of the shields. The Norwegian Viking laws, for instance, specified that a shield should be made from wood and three iron bands should be used to reinforce its structure.

One of the richest sources of information about Vikings shields is in classic Viking literature. A large body of Viking poems deal directly with the shields, elaborating on their significance and on the mythological scenes painted by the notable warriors on their shields. It is largely thanks to this body of Viking literature that much is known about Viking shields today.