Medieval games were a mixture of different things. Some of these games involved combat, others required a demonstration of strength, yet others needed stealth and skill to win.

There were games related to fighting, games about combat skills such as archery, and indoor games which primarily tested the mental prowess such as Nim and Checkers. Various games were meant for people of various age groups and some were played at specific events or festivals.

Children played many different games, most of them fairly simple, during the medieval ages. Boys played games like leapfrog, and tug-of-war and played with floating boats.

Walking on stilts was a popular medieval game among the children. As the name suggests, it included walking on stilts which required great balance and concentration. Another popular game was See-Saw. A makeshift See-Saw was often contrived by putting a barrel under the support and two children then sat at both ends of this support. 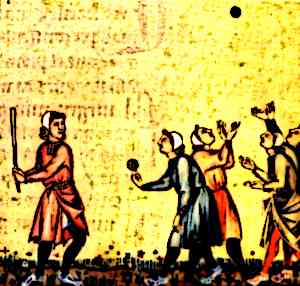 A number of games related to skill and strength were played during medieval times. These included contests in archery, Quoits which required the tossing of rings onto a wooden pin, and the throwing of hammers to measure the strength of the thrower. Wrestling was also a common sport while stick combat was often done between children and adults who imitated the fights in real tournaments with wooden sticks for swords.

This game was particularly popular in France and England during the medieval ages. It was played between two players and each player had an army of nine tokens. The objective of the game was for the player to capture the opponent’s army first.

The gameplay began with a blank board and then the players would place their nine tokens in strategic places all over the board. Once all the tokens were in place, the players shuffled them around to create “mills” by aligning three of their tokens on the same line. This allowed them the opportunity to take out one of the enemy’s tokens from the board. 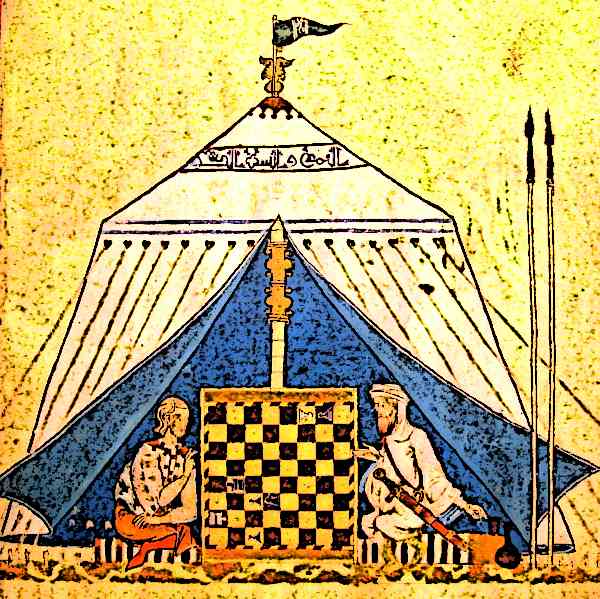 Another popular medieval game was draughts. This game was played on a board of 10 x 10. It involved the diagonal movement of similar pieces. The gameplay involved jumping over the enemy’s pieces and capturing them.

Fox and Geese was a game that began to be played in Europe during the Viking Age but was quite popular during the medieval ages as well. It involved the interplay between one piece called a Fox and 13 pieces called geese.

In the gameplay, the Fox could jump over another piece while the geese can move only in adjoining spots horizontally, vertically, or diagonally. The aim of the player using the geese is to trap the Fox so that it has no options but to jump to another spot or to move anymore.

The philosopher’s game was one of the few games played in the medieval ages which also had its origins in the same period. It was invented in the 11th century and was very popular until the 14th century.

This game was played on an 8 x 16 board. The pieces used in the philosopher’s game were in the shapes of circles, rectangles, and triangles. Winning the game involved a complex mastery of arithmetic and numbers.

Apart from board games, the origins of many modern sports can be traced back to the medieval era. Tennis, for instance, was a popular sport in France in the medieval ages. Tennis courts were specially constructed by the nobles for the game and the ball used in the game was made up of clothes wrapped together. 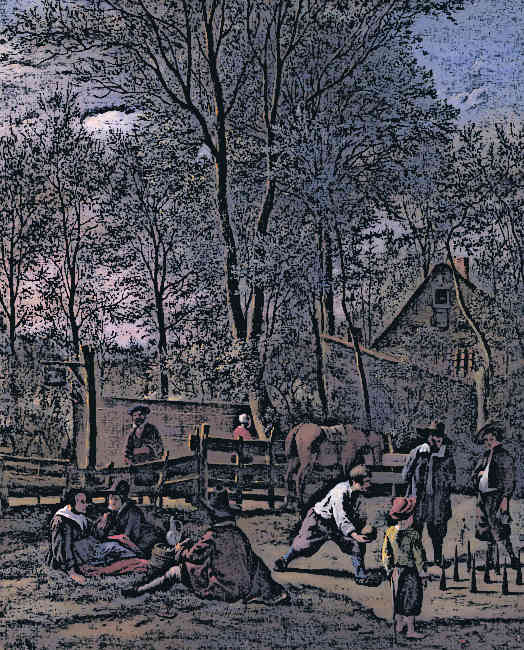 Skittles was one of the best outdoor medieval games and was particularly popular in England.

Skittles was the precursor of modern-day bowling. It was usually played by the nobles and required the use of wooden balls to knock down skittles placed at the end of an alley. The game was particularly popular in England. A variant of skittles was also played in Germany during the medieval ages.

Shinty was a medieval sport that can be deemed the precursor of modern-day hockey. It was originally played using curved wooden sticks and a leather ball. Goalposts were established on both ends of the fields and one player guarded each of them. Much like hockey, the leather ball was passed between the players before they attempted to score it through the posts. The game is still played in England.

Stoolball can be deemed one of the early forms of cricket during the medieval ages. In this sport, one person pitches the ball and tries to hit a stool with it. The defending player stands in front of the stool, either armed with a bat or unarmed, and attempts to stop the ball from hitting this stool. The game was associated with Easter time and was played by both men and women.

Shrovetide football was an early and more rudimentary form of modern football. It was played with a leather ball between two teams and the aim of each team was to reach the other team’s post. The rules in Shrovetide football were fairly relaxed so that on occasions there are no limits to the number of players participating in it. In some cases, the ball was passed with hands. In other cases, especially in instances when the game was played by the mob, feet were often used to drag the object to the opponent’s side of the field.