Top 10 Events of the Tudor Era

What were the Most Important Events of the Tudor Era in Medieval England?

In English history, the Tudor period was one of the most transformative and exciting periods.

Tudors were a Welsh-English family that ruled England and Wales for nearly 118 years.

Henry VI was the first Tudor monarch whereas Elizabeth I was the last one.

The Tudor reign witnessed the most sweeping changes in England which affected almost every aspect of life.

The medieval English army was gradually transformed into a larger, firearm-wielding force that was supported by formidable gun forts and powerful ships. 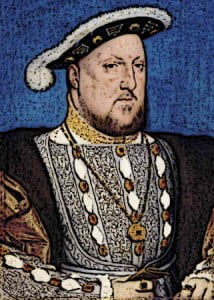 Top 10 Events of the Tudor Era

War of Roses was actually a series of civil wars fought from 1455 to 1487 in medieval England.

A bitter struggle for the English throne was waged for almost 32 years between the two descendants of Edward III which formed the House of Lancaster and the House of York.

The name “War of Roses" was given because the emblem of the House of Lancaster was a red rose while House of York’s emblem was a white rose.

In this war, the Battle of Bosworth is thought to be the final conflict.

Historically, the battle of Bosworth is quite crucial as it ended the War of Roses and finally planted the Tudor house on England’s throne.

Henry Tudor, a Lancastrian, defeated the Yorkist King Richard III on 22 August 1485 at the Battle of Bosworth Field.

Henry was crowned as King Henry VII after the battle and married Elizabeth of York which helped unite both the families.

Henry also created a Tudor rose, having both white and red roses which symbolized the end of the war between York’s and Lancaster’s.

In 1513, conflict between Scotland and England came to a head and led to the Battle of Flodden Field.

The battle is described as the last great medieval battle taking place in the British Isles.

James IV of Scotland died in the battle and the Scots lost. Most of James’ leading nobles were either imprisoned or died in this battle.

4 – Battle of Blackheath – Top 10 Events of the Tudor Era

This battle was fought between the army of King Henry VII and the Cornish army.

The Cornish people were angry because of the closure of their Stannary parliament by King Henry VII, and the taxing imposed on them to pay for war with Scotland.

An army of nearly 15,000 people gathered to fight the English forces.

The Royal family took shelter in the Tower of London after listening to the news of this great march.

On the other hand, the King’s army consisted of 25,000 men which was one of the largest armies ever gathered by an English king.

The battle was won by the King’s army and all the Cornish leaders including Michael Joseph and Baron Audley were captured and imprisoned.

This battle was one of young Henry VIII’s first achievements as King.

This battle was also known as the battle of Guinegate was fought on 16 August 1513.

English forces fought with French forces in this battle.

It is called the “Battle of the Spurs" because the French knights, after realizing they were outnumbered, fled on horseback while their spurs glinted in sunlight.

This battle is considered to be the last medieval style battle fought between England and France and a remnant of the Hundred Years War.

As independent states, the Battle of Pinkie Cleugh was the last pitched battle fought between England and Scotland.

This battle between the old enemies was not for territory, but to create an alliance.

On the day of battle, the armies met at Lothian. The ensuing battle lasted for around 5 hours and at its end, English forces were victorious and had the Scots surrounded.

On March 1489, an agreement took place between England and nascent Spain which was named as Treaty of Medina del Campo.

This treaty comprised of 26 clauses, the first sixteen of which dealt with military, political, and economic relations between the two countries.

The Seventeenth clause was about the marriage between Arthur and Catherine.

The remaining ten clauses consisted of financial settlement and succession.

This treaty was however rejected by the Spanish rulers and in the end, the terms went largely rejected.

The peace of Etaples was signed on 3 November 1492 between King Henry VII of England and King Charles VIII of France at Etaples (northern France).

The terms of this treaty involved the English accepting French control of Brittany and the withdrawal of Warbeck along with a war indemnity of 742,000 crowns.

After 1492, reconciliation occurred between France and England which continued till the end of Henry VII’s reign.

A mysterious and contagious disease struck England in the beginning of 1485.

The symptoms of sweating were usually sudden with death frequently occurring within a brief time on the onset of symptoms.

This curious and infectious disease occurred mostly in summer and early autumn.

In England, the last major outbreak of this disease took place in 1551.

In 1587, the Spanish under King Philip II and with the support of Pope decided to invade England remove the Protestant Queen Elizabeth.

To this purpose, the Spanish prepared a sizable fleet which was known as the Spanish Armarda.

The fleet, though sizable, met disastrous weather and failed to undertake an invasion.

A similar fate met a second fleet launch to the same purpose.